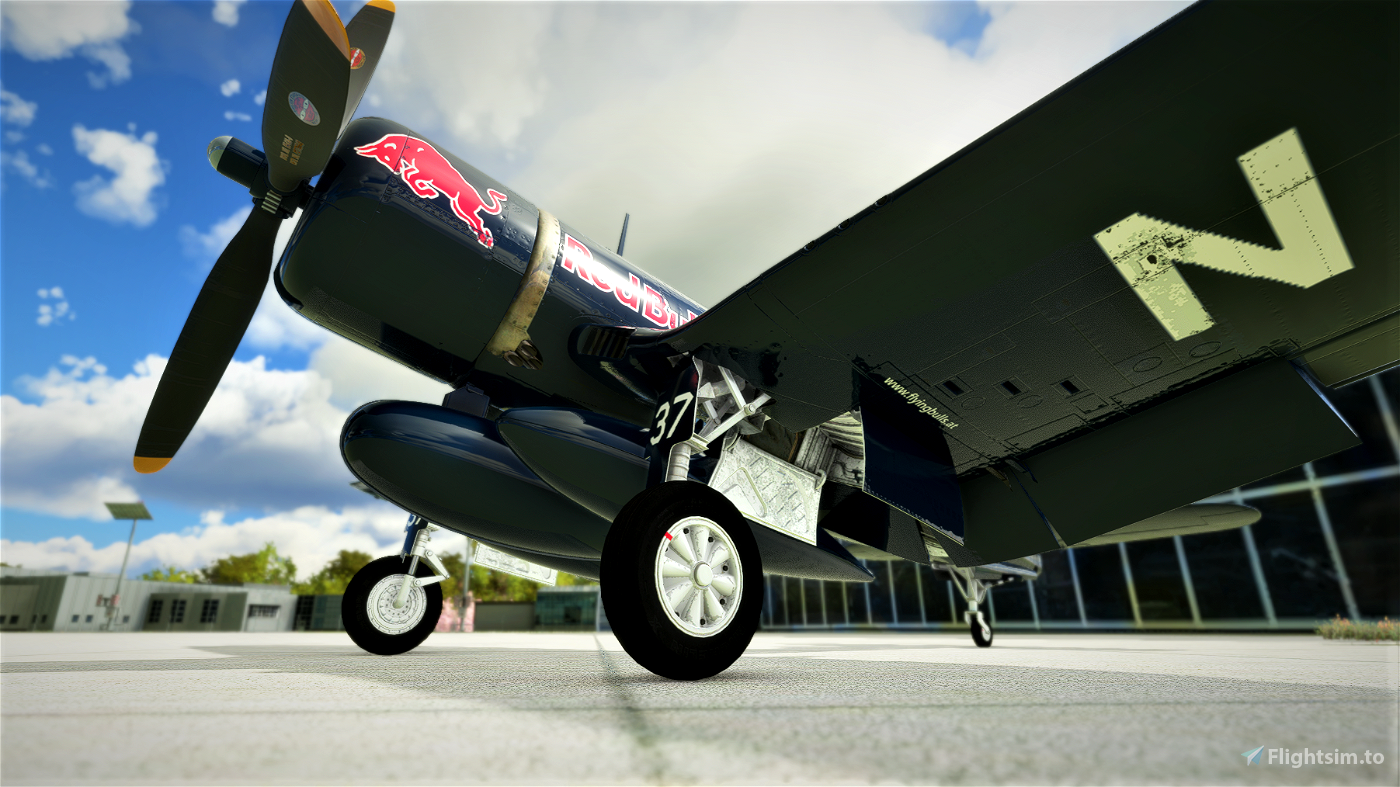 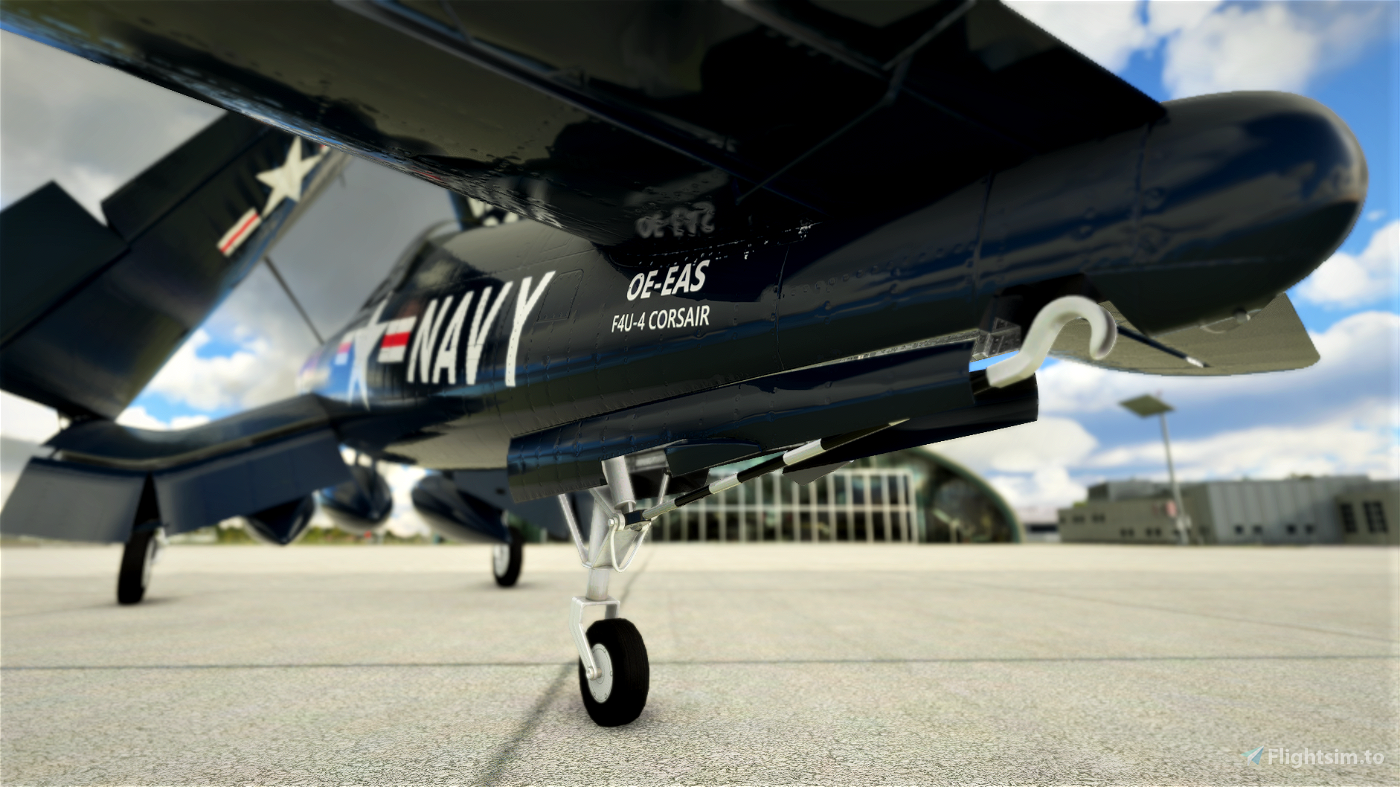 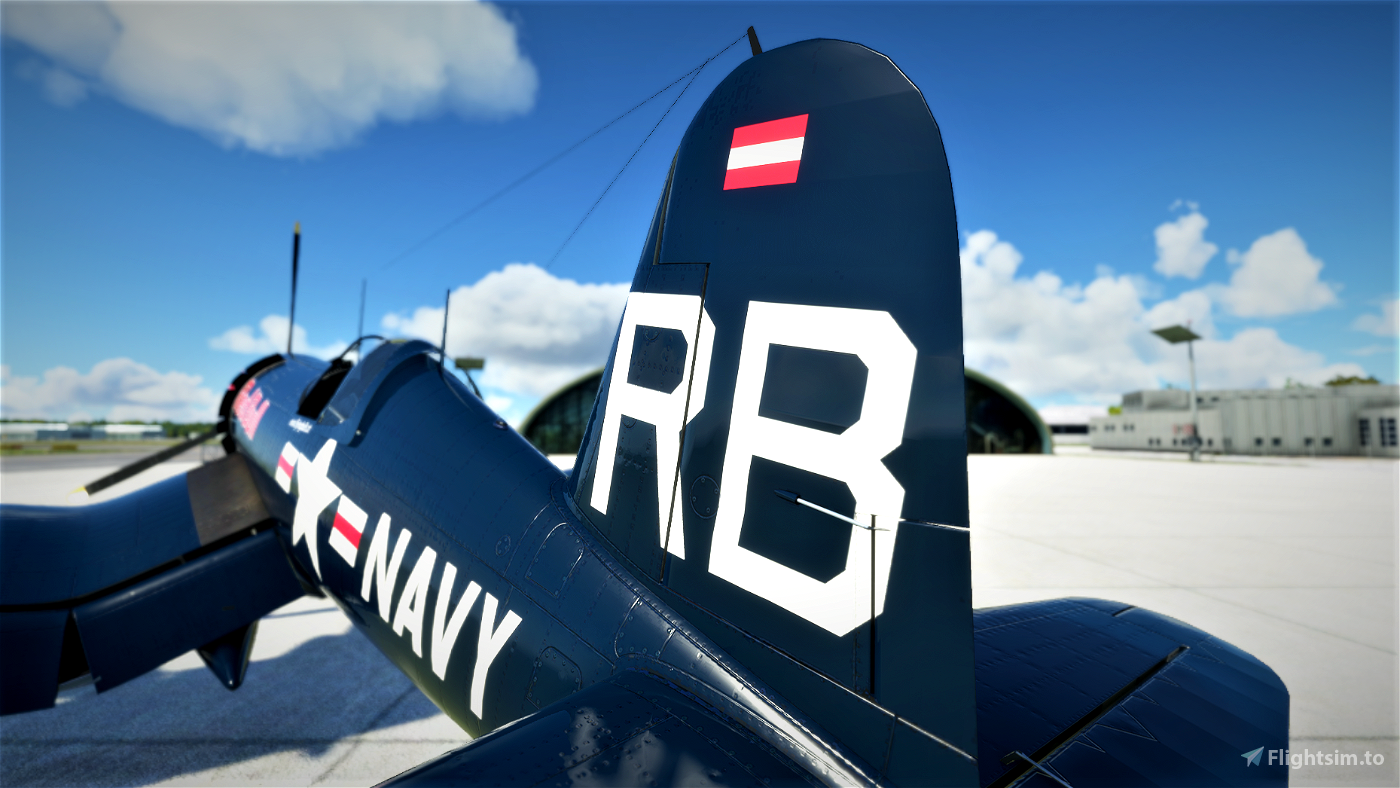 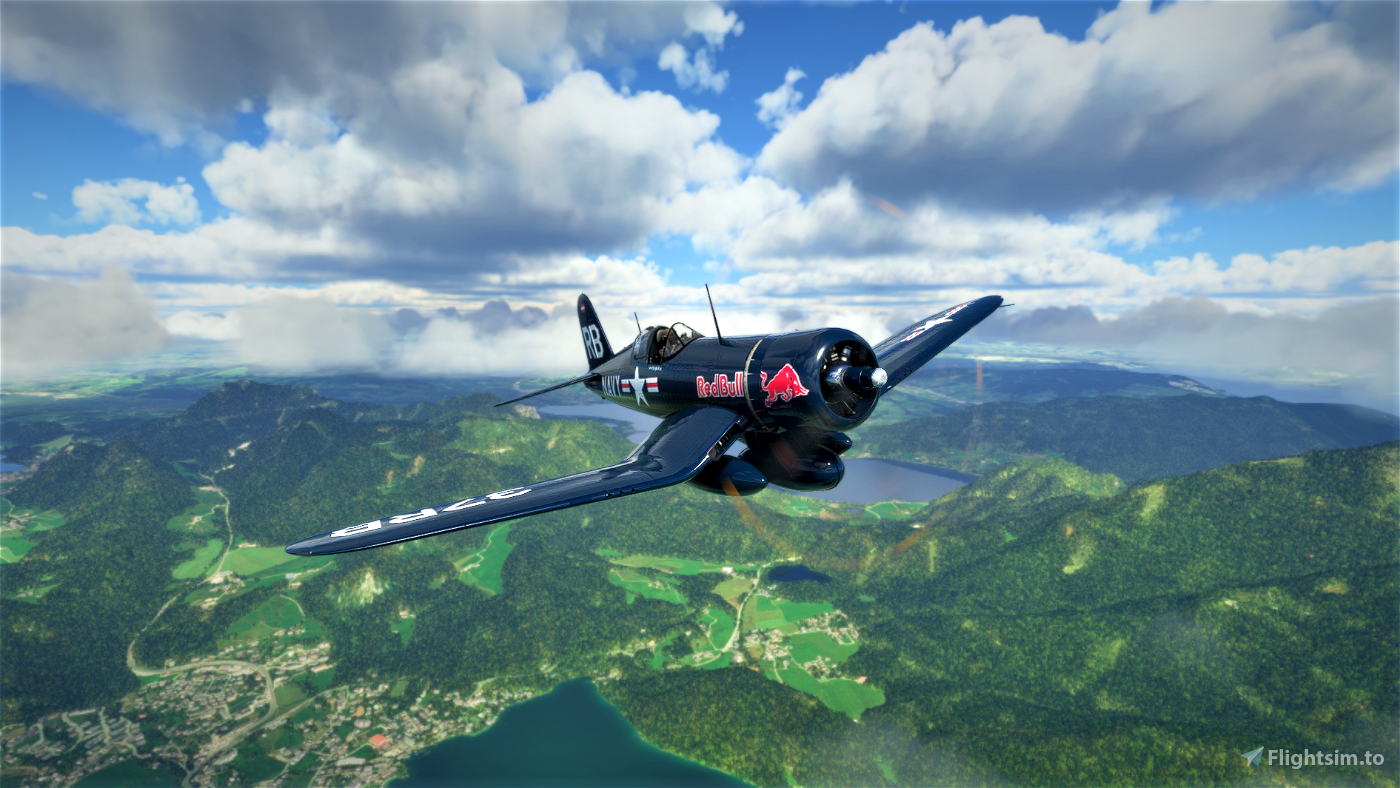 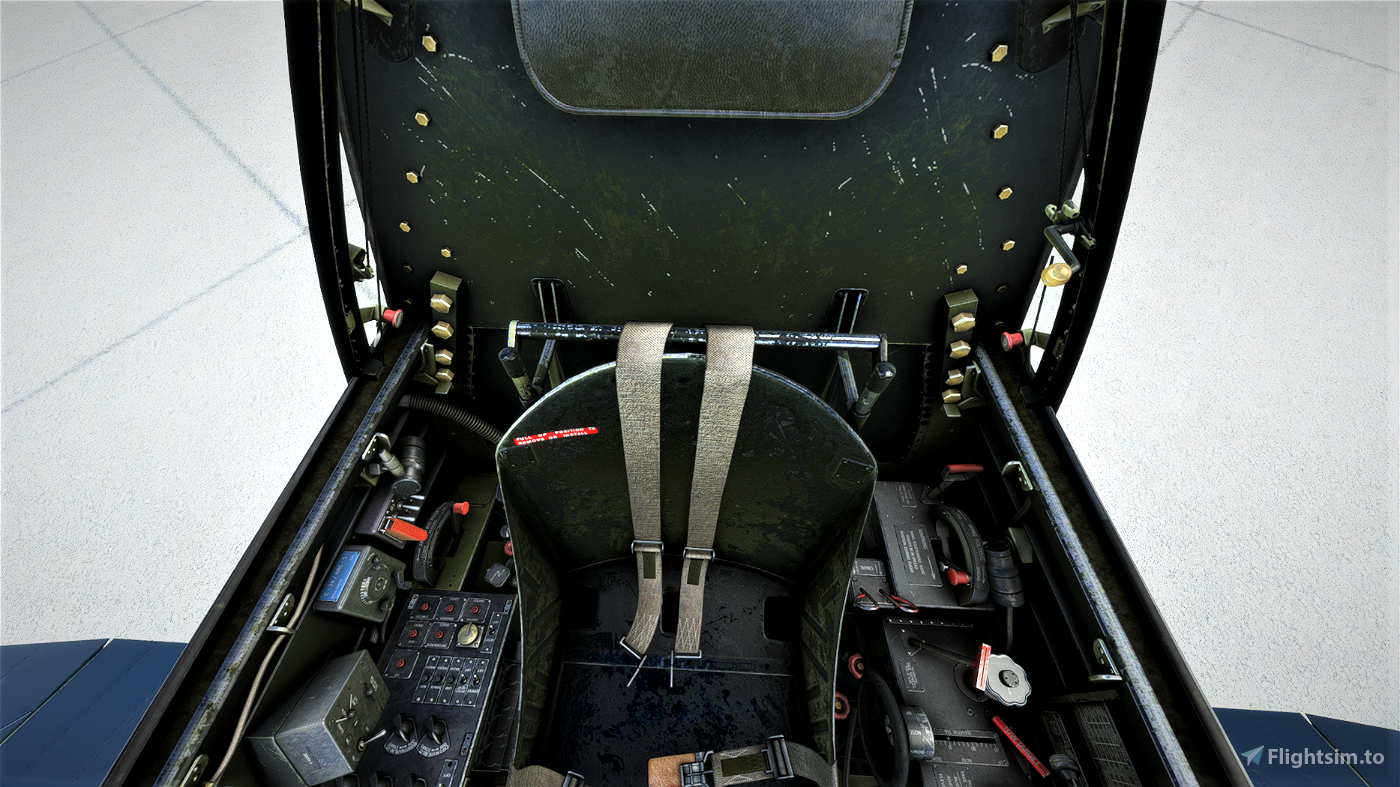 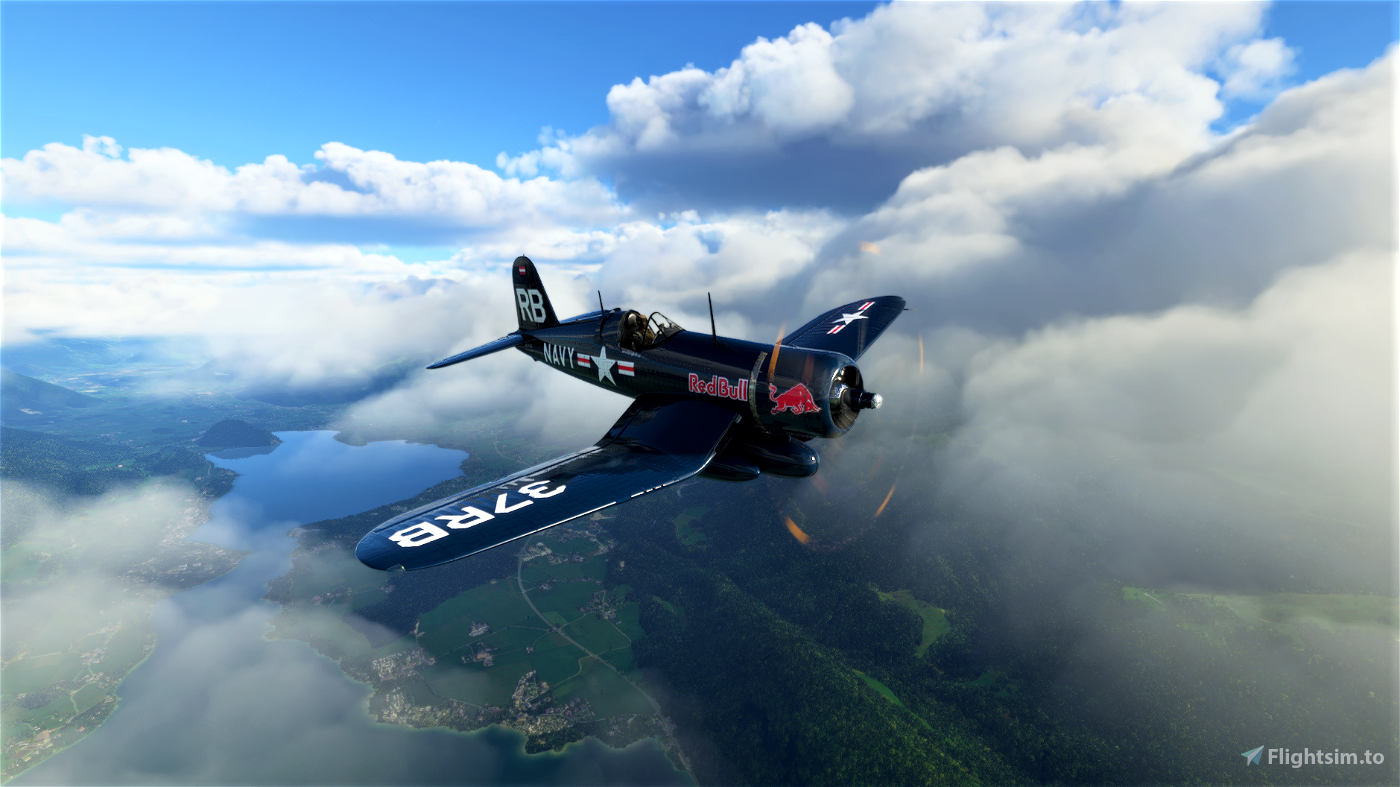 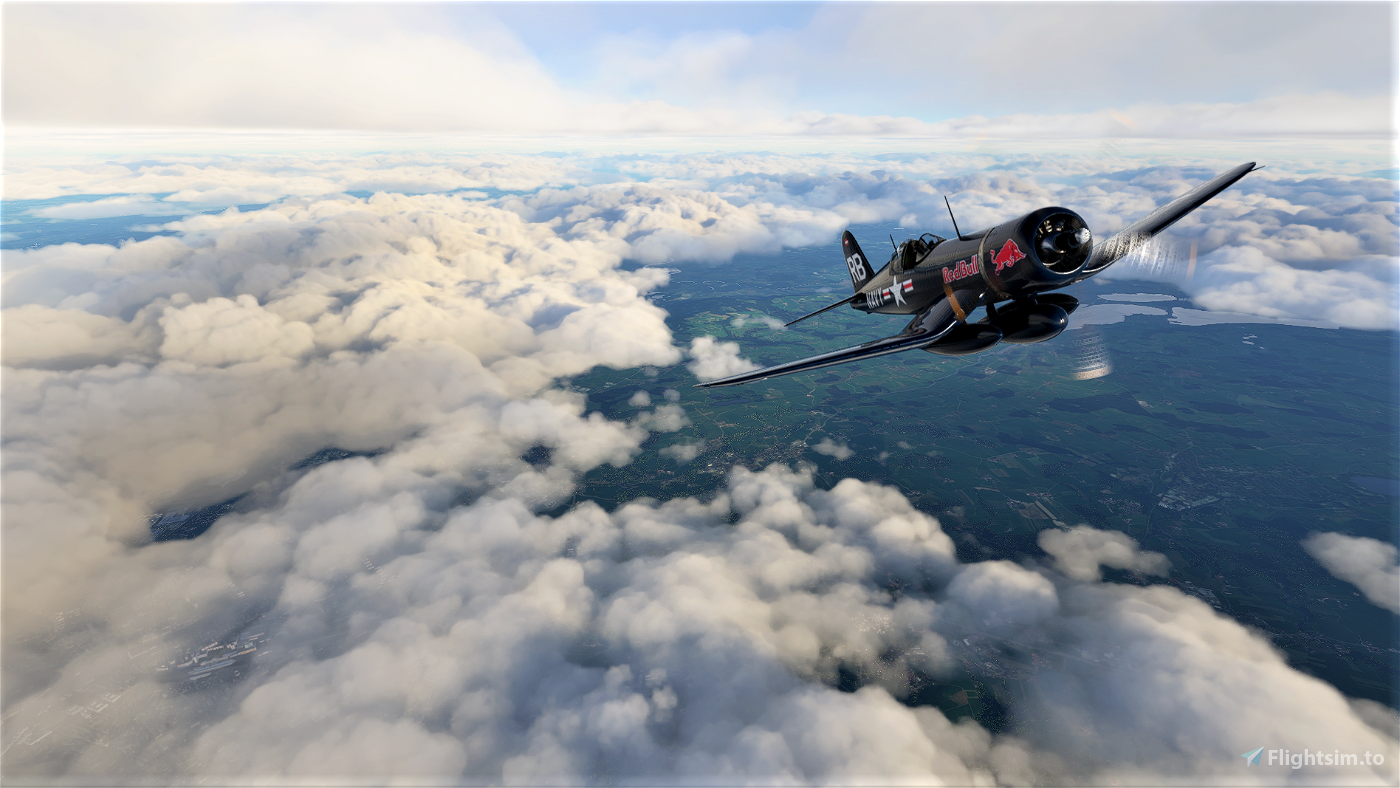 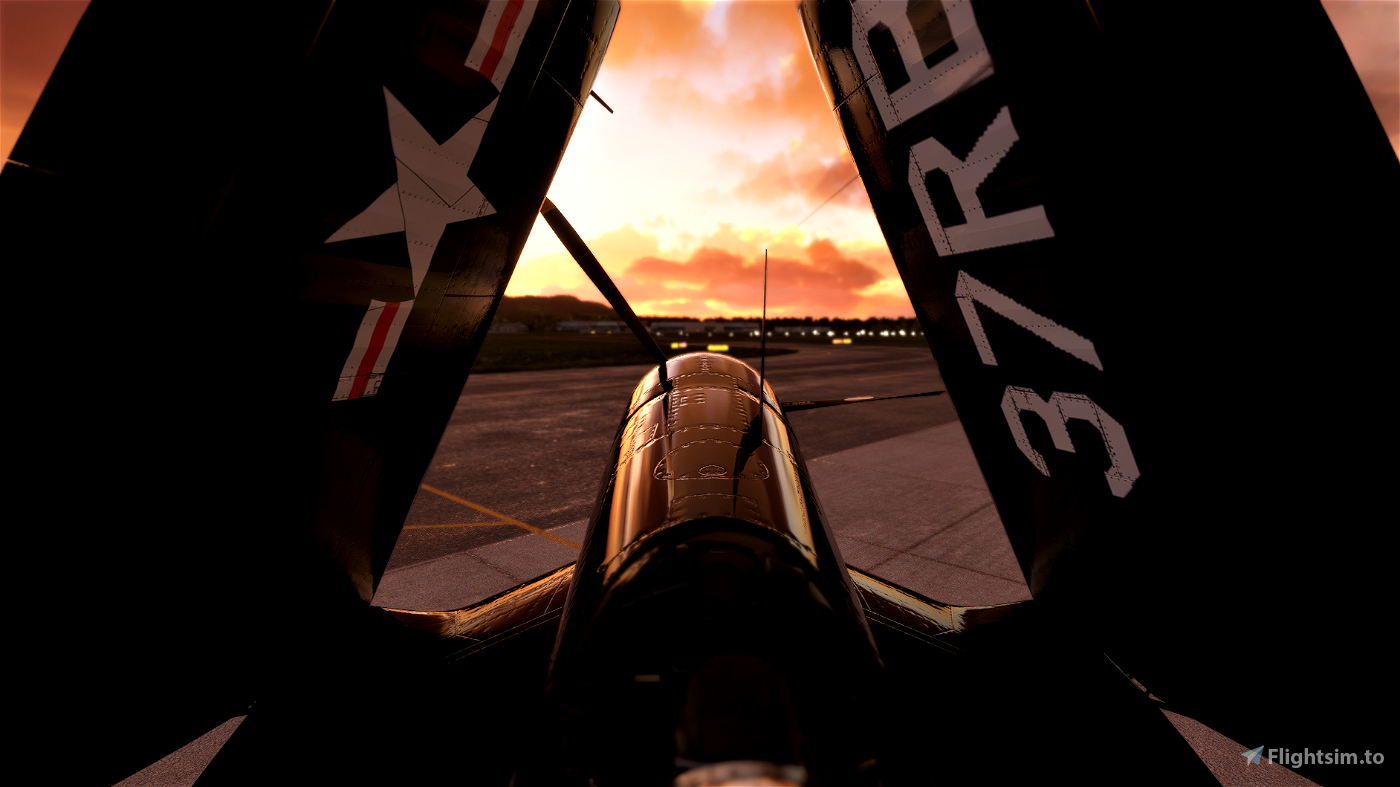 The Corsair F4U-4 of the Flying Bulls is an especially demanding plane: approximately 40 maintenance hours are needed for every flight hour. The fuel consumption amounts to an average of 400 liters an hour, even triple that at takeoff. The airplane is entirely fit for aerobatics, but it is flown conservatively because of its age. Still, 4.5 g’s in a steep curve is not uncommon despite the protective treatment.
Furthermore, the top speed of 750 km/h is only seldom attained, in order to keep the engine’s wear and tear to a minimum.

- Drag it into your MSFS Community Folder (Unpacked Size ~ 1.4 GB)

- Ready for Take Off!

- Ribbon Bands on Wing for better Grip for Engine Maintenance

- Custom Colored Helmet in Style of the Corsair

with the Release of the 3rd Version of this Livery, i will end this Project finally. I will do only just minor fixes for upcoming updates.

Special Credits to zlin142, who did an awesome job of the version of this aircraft! check him out!


Log in of Liveries in this category are made to be used with the payware aircraft FG-1D by MilViz .
Toestemmingen

1 month(s) ago
Thank you very much, it's very beautiful

Thanks i really appreciate it 😊 happy flying

1 month(s) ago
Edit:
Okay, thank you. Your apologize accepted. 😉
Next time, put your own and the other’s texture on top of each other in photoshop and check for similarity there. You will easily recognize if someone steals from you.

as i wrote to you - it happend to me twice here on Flightsim.to - if i am wrong, its my bad, i am just warily about that.

Two wishes:
- can you please remove those jagges of the word NAVY ?
- the alignment of the letters RB on the left rudder site

Thank you so much for this livery 😉

Nice to hear that! I'm from Austria too, mate 😊

- i will see if i can fix the Navy Logo beneath the Wing
- otherwise, the rudder seems to be just fine 😊 -> Correction: now i saw what you mean haha

I know, it´s difficult to describe without an picture 😁

The next Update is coming really soon 😊

Thank you ! Really appreciate It! 😊

It was a Pleasure to make it! Hope you all like the Livery!

Thank you, you are wonderful. I would also ask for a Cessna 152, my request too.
https://flightsim.to/request/livery/3275/cessna-152-aerobat-from-the-czestochowa-aeroklub

Hello, awesome work but plz if you can, remove the big white antennas .)