World War 2 RAF Tilstock Version 0.62 Rebuilt under Update 6 and SDK 14.1.  I have also uploaded a fresh version of the project folder wihich also has all the FreeCAD and Blender 3D models used so you can have a go at doing your own... 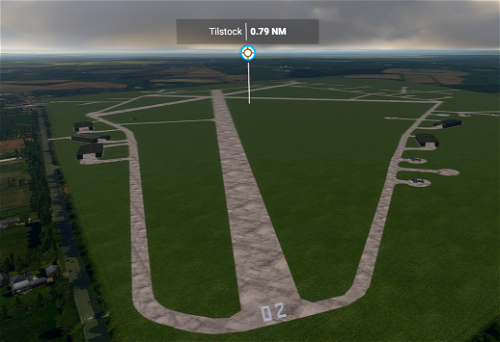 Rebuilt under Update 6 and SDK 14.1.  I have also uploaded a fresh version of the project folder wihich also has all the FreeCAD and Blender 3D models used so you can have a go at doing your own version or use the models in your own Airport.

Added a perimeter fence which is a total of over 3 kilometres long in multiple sections.
Added a control tower built in blender using Archipac to make nice looking doors and windows.
Greatly improved the Blender made hangars.
Slightly improved the models of the Lancaster Bombers.

Further improvements are planned based on the extensive historical information available in Whitchurch Shropshire from the local Heritage centre once restrictions are lifted and access becomes easier.  This next stage is unlikely to yield a further update before 2022.

ZIp file of project folder included which includes all Blender Models (Hangars and Fences etc.) and the FreeCad model for the Hangar which was exported to Blender in multiple STL  files..

The Blender 3D fence models are designed to allow a string of fence sections, of any length (made from a set of parts using an array modifier), to be positioned on uneven ground ; however for this version I took the easy way out of leveling the ground using terraforming so that the whole airport is level.   If anyone wants the procedure for using the fence models which involves exporting from blender to SDK versions with markers to aid positioning and then overwriting with versions without markers, then please message me..

The Hangar models were also improved, by adding foundations to make them sit better on uneven ground and using a completly different method to make the roof windows inspired by the way the Archipac add on for Blender makes openings and windows.

In the Blender Model each of the 12 sliding doors is a separate moveable item so its quite easy to set the doors in any position.

There was an RAF airport here in World War two with three runways that are still discernible on the satellite view.

I am working to gradually add more and more of the original WW2 Airport and local scenary.

9,000 miles Of Concrete; a report on the hundreds and hundreds of WW2 Airfilelds Historic England Report

Pictures of the \airport as it is now:

The original Control Tower has been preserved see www.controltowers.co.uk/T-V/Tilstock.htm.

More Photoes:  Aerial and Other Pics

Create a free account now to be able to to keep track of your mods and their latest updates without struggle.

2 year(s) ago
I have dropped parachutists here many times, please be sure to show the runway as being very rough and very short, the local farmer uses most of the runway for storage of hay or stuff , i look forward to seeing how you get on
0
0
Reply

The runways I have put in are smooth concrete as they would have been at the end of World War 2.

It would be interesting one day to make a version of the Airfiled as it is now complete with all those solar panels, an appropriatly rough surface, and the hangar used by the Parachutting fraternity looking as it does now - one day soon.

We kindly ask you to understand that we cannot process copyright requests through this form, as we are required to receive such correspondence in the form of a formal complaint to comply with the Digital Millennium Copyright Act. Please familiarize yourself with the DMCA procedure and send us your notification to the address below. Please note that incomplete or invalid complaints will not be processed.

In accordance with our policy, we respond to notifications of alleged copyright infringement that comply with the Digital Millennium Copyright Act on the U.S. Copyright Office website and other applicable intellectual property laws. Our response may include blocking access to or removing allegedly infringing material and/or terminating accounts. If we remove or disable access to material as a result of such a notification, we may notify the owner or administrator of the affected content to provide a counter-notification.