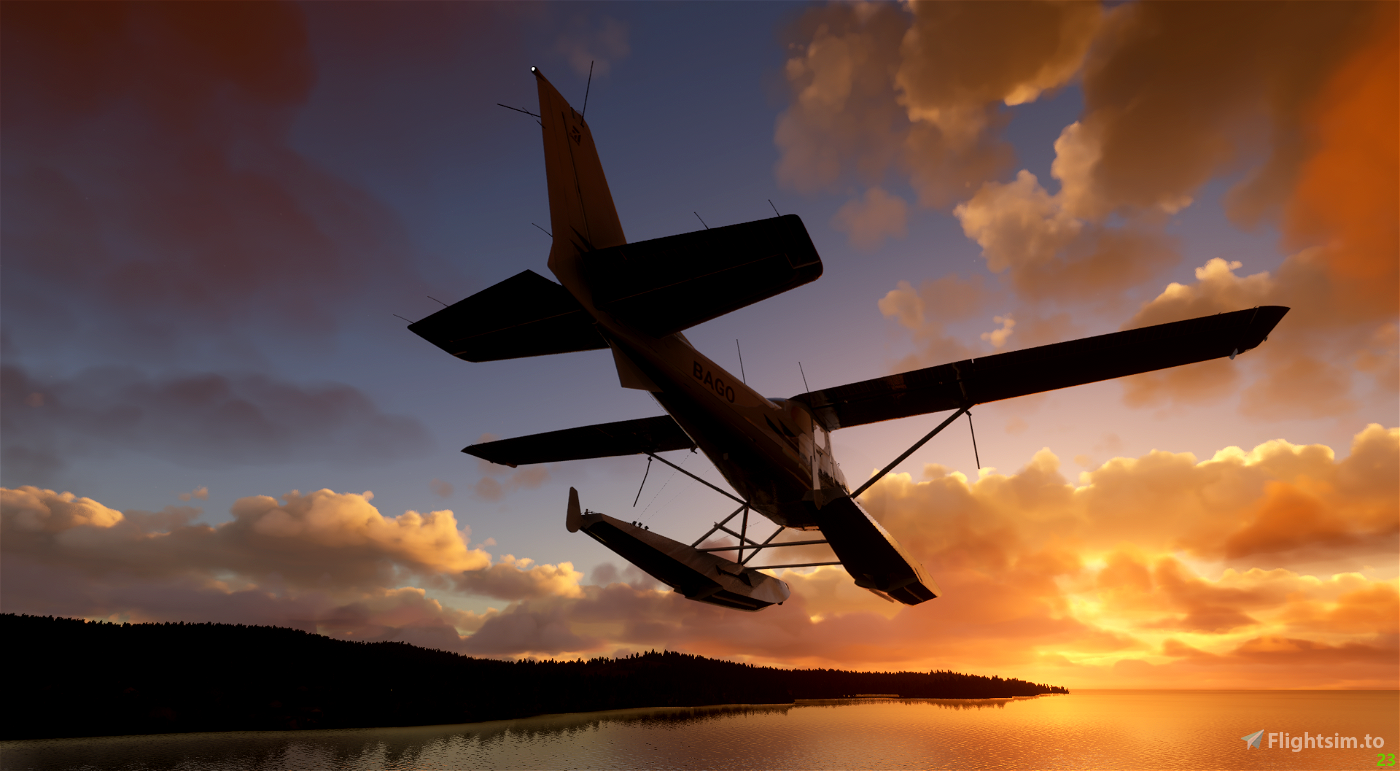 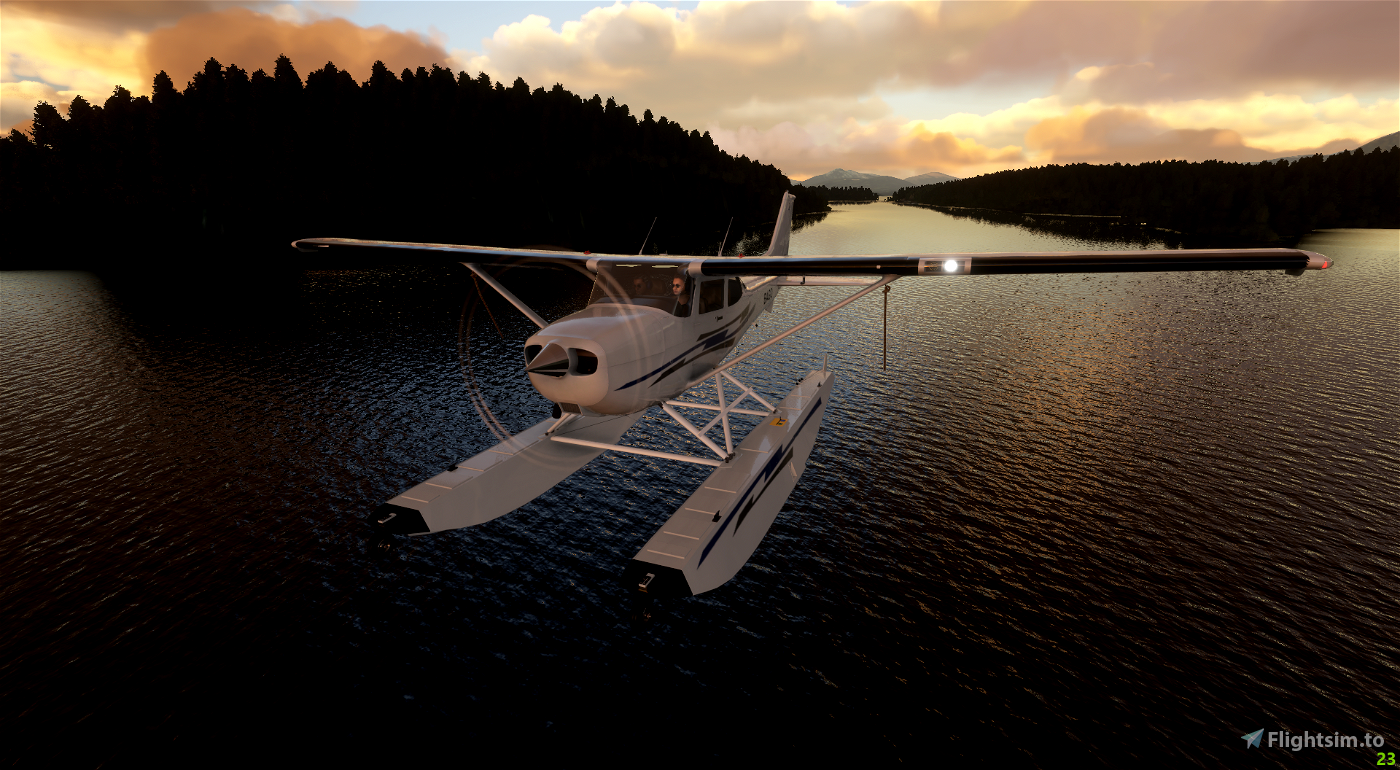 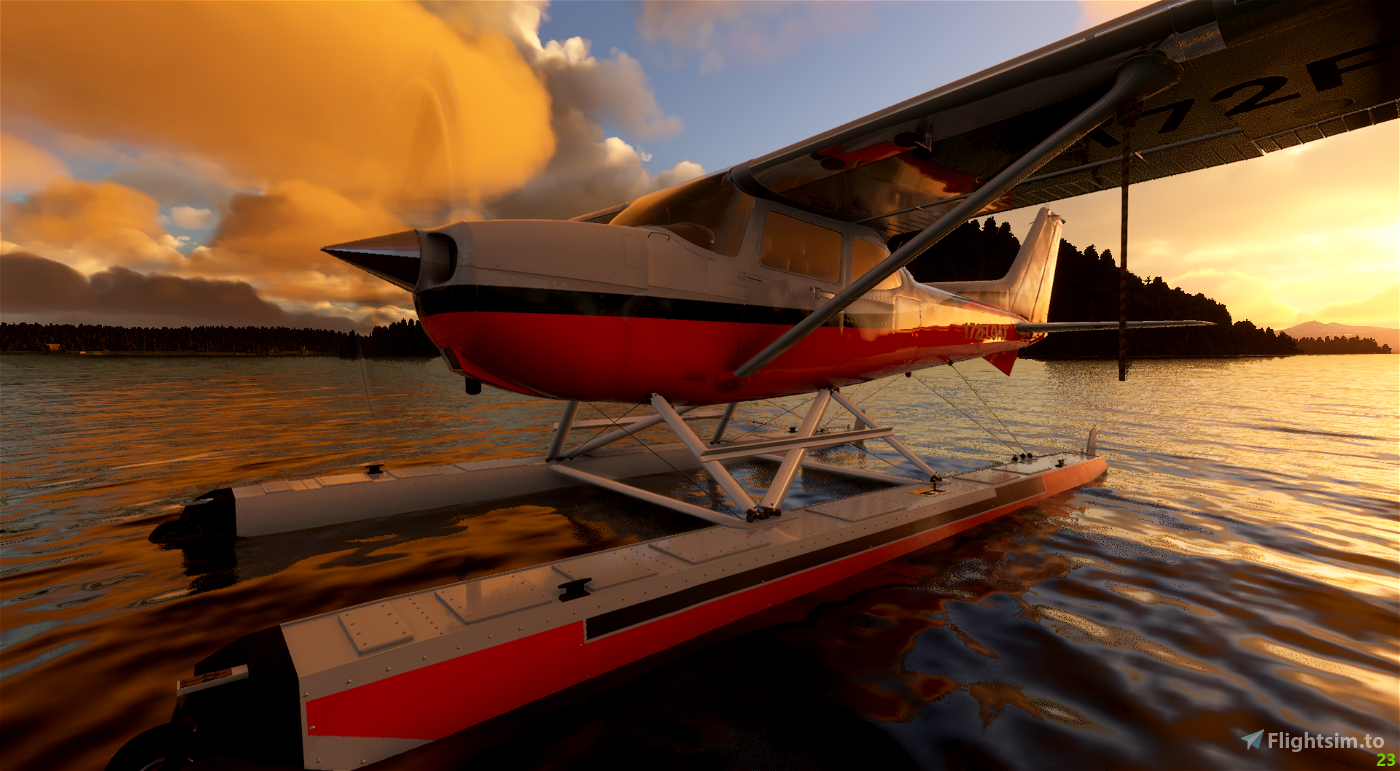 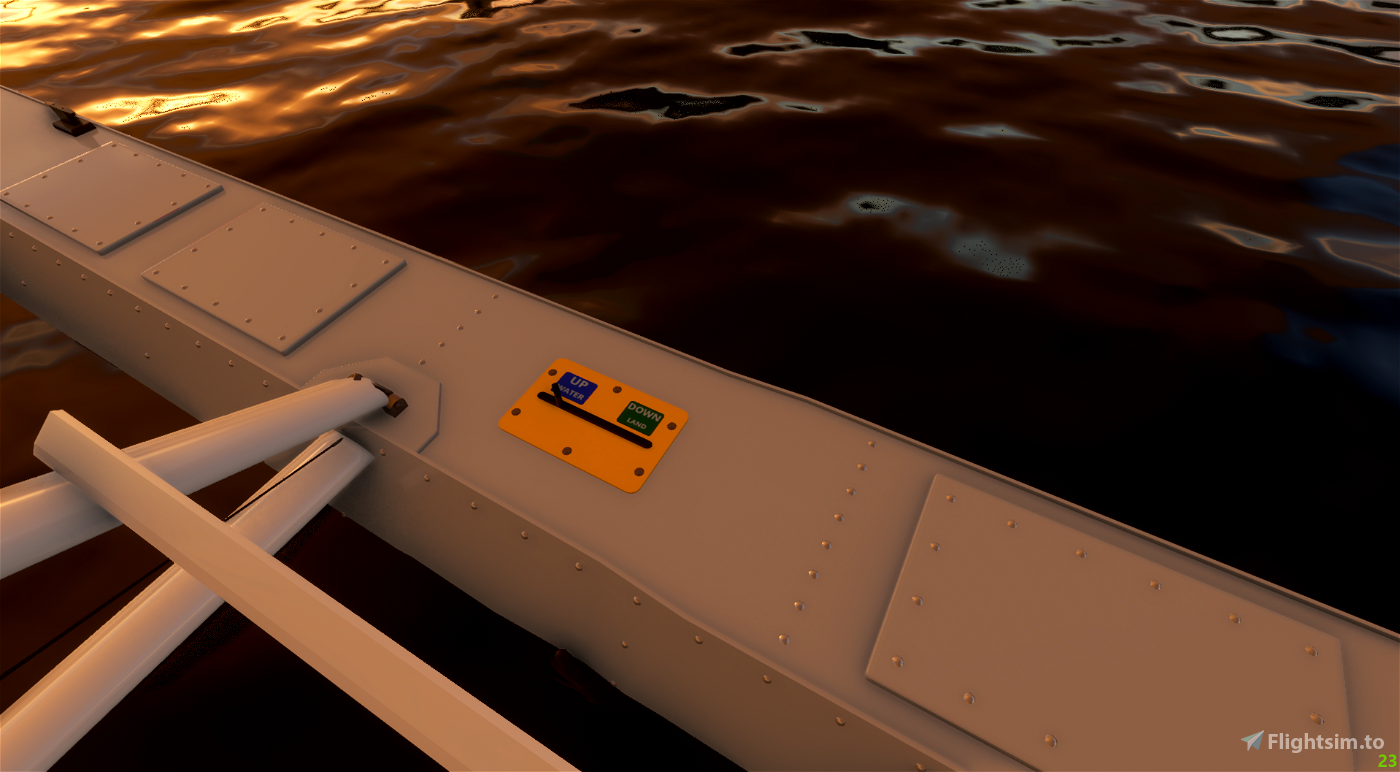 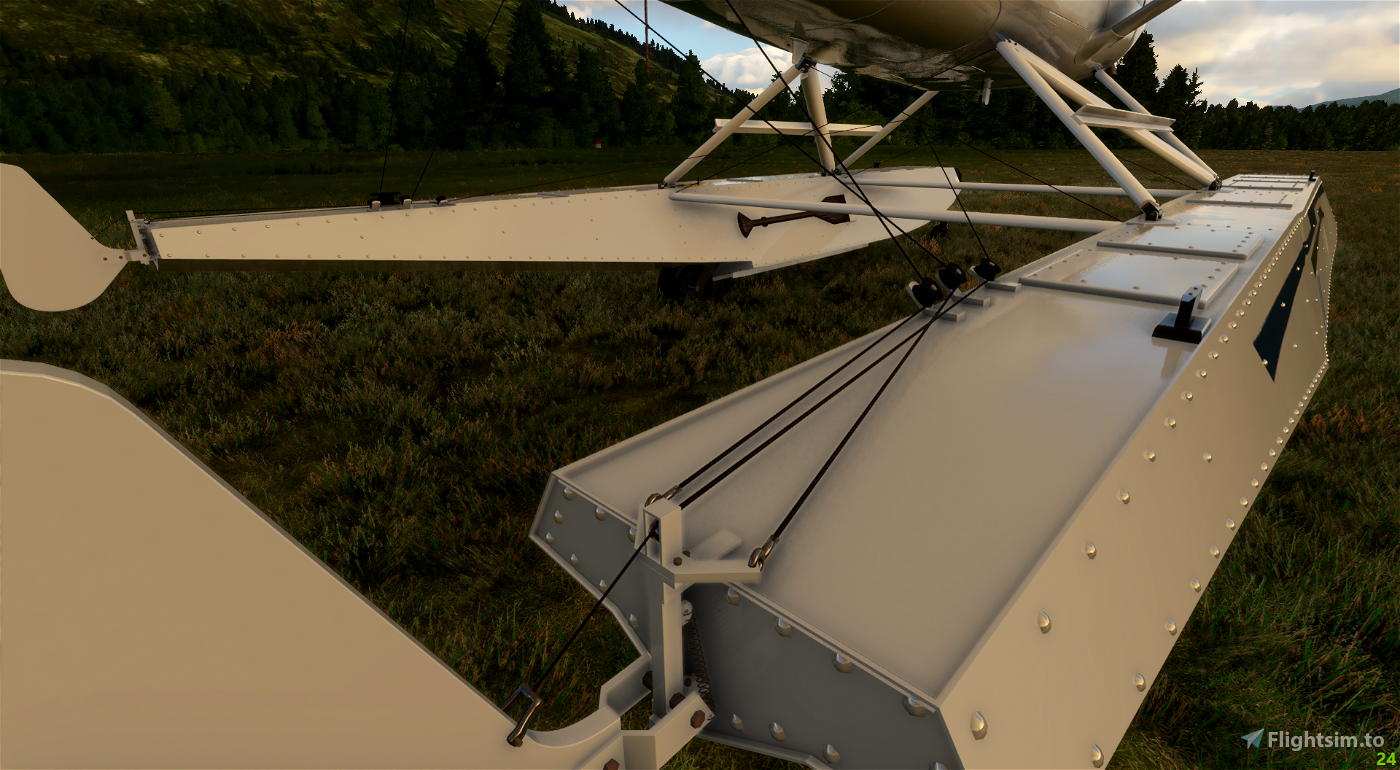 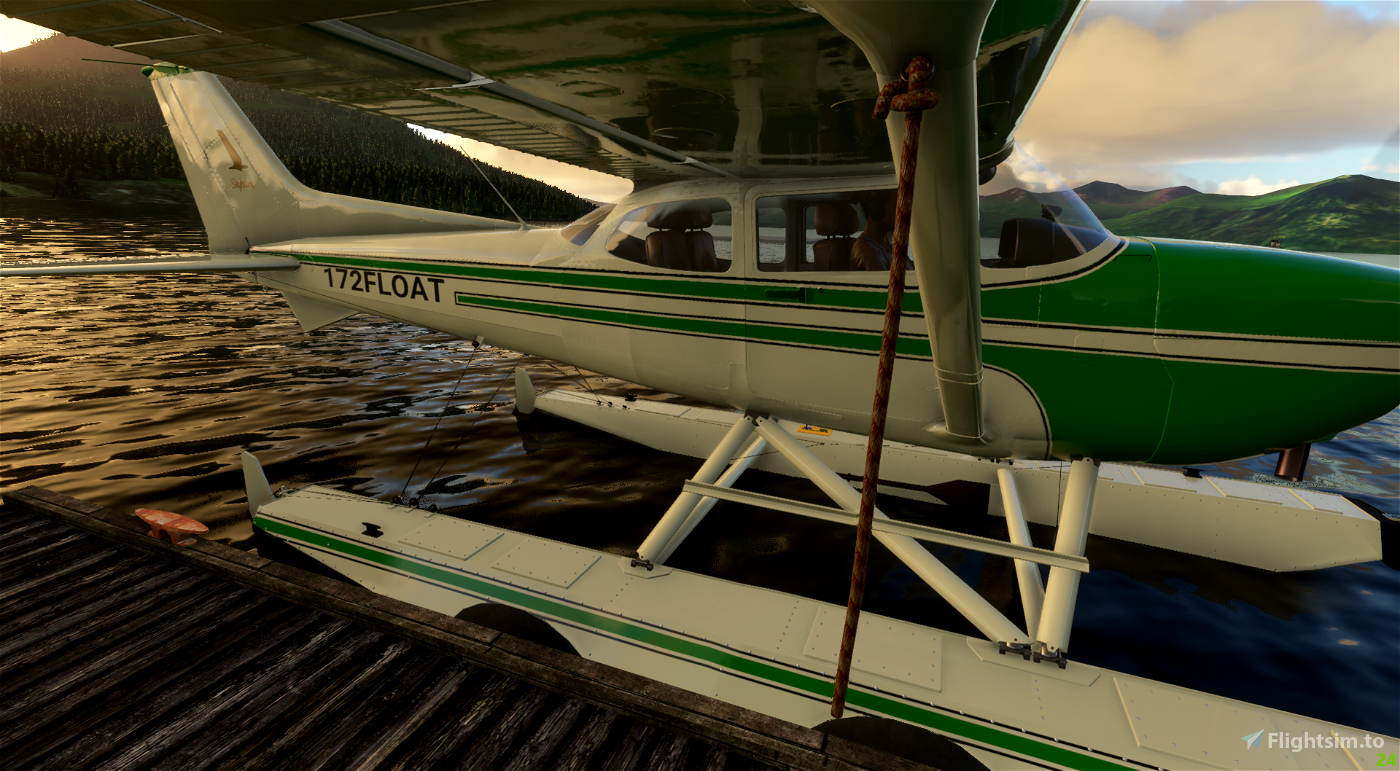 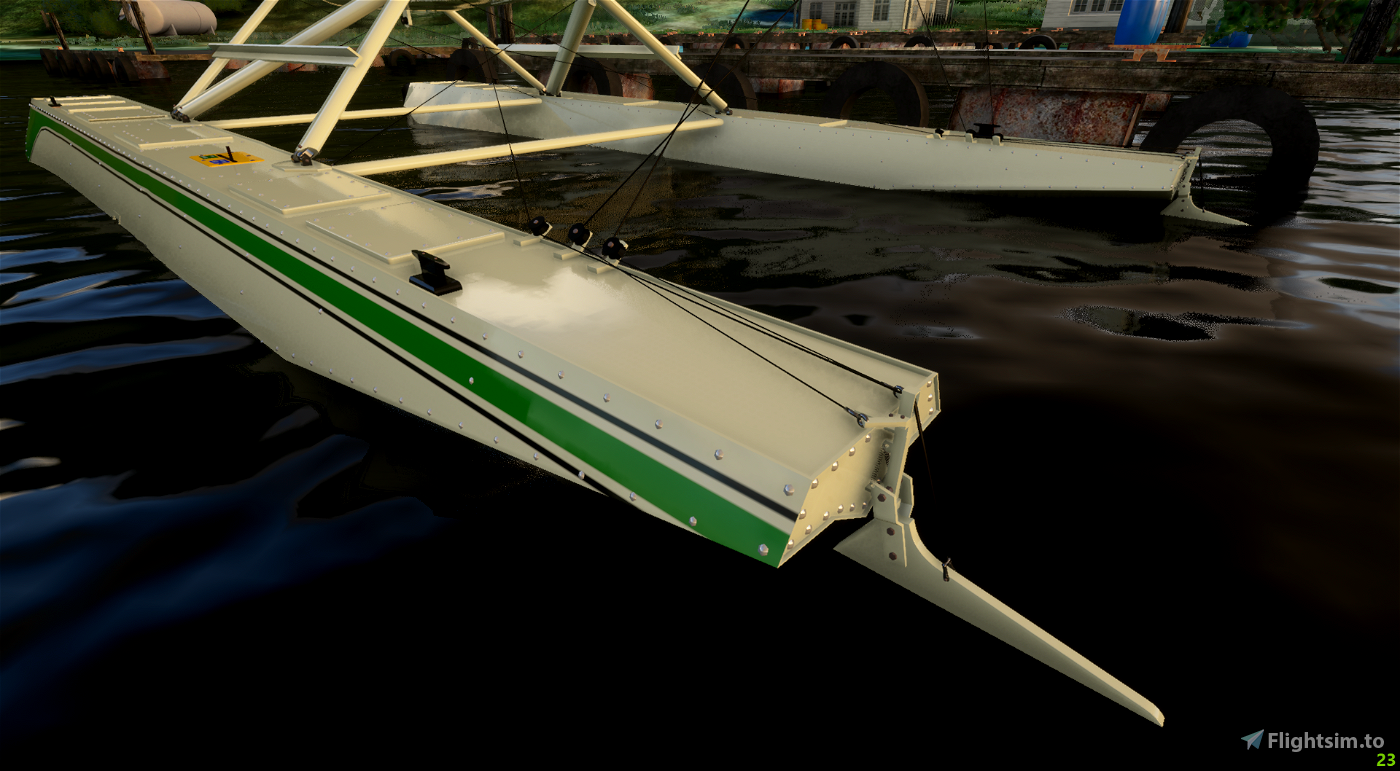 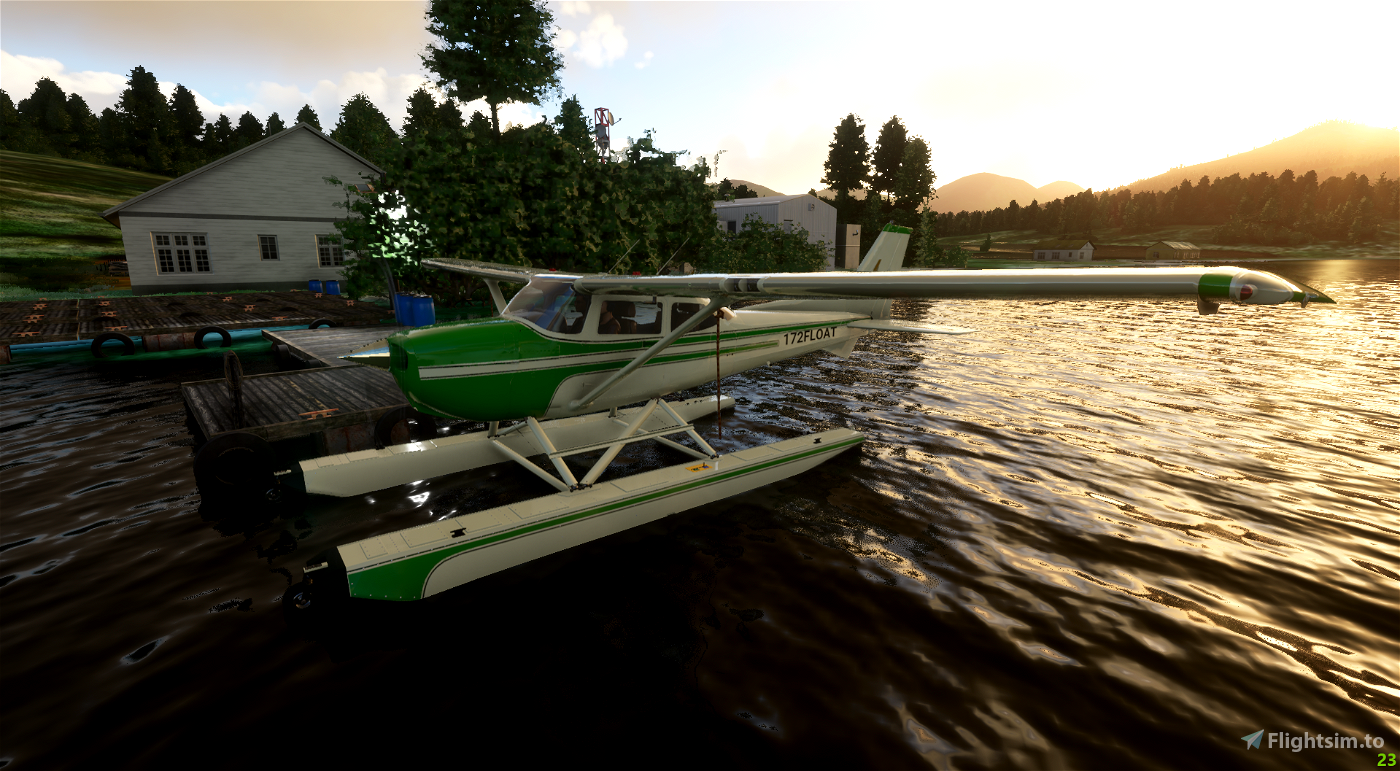 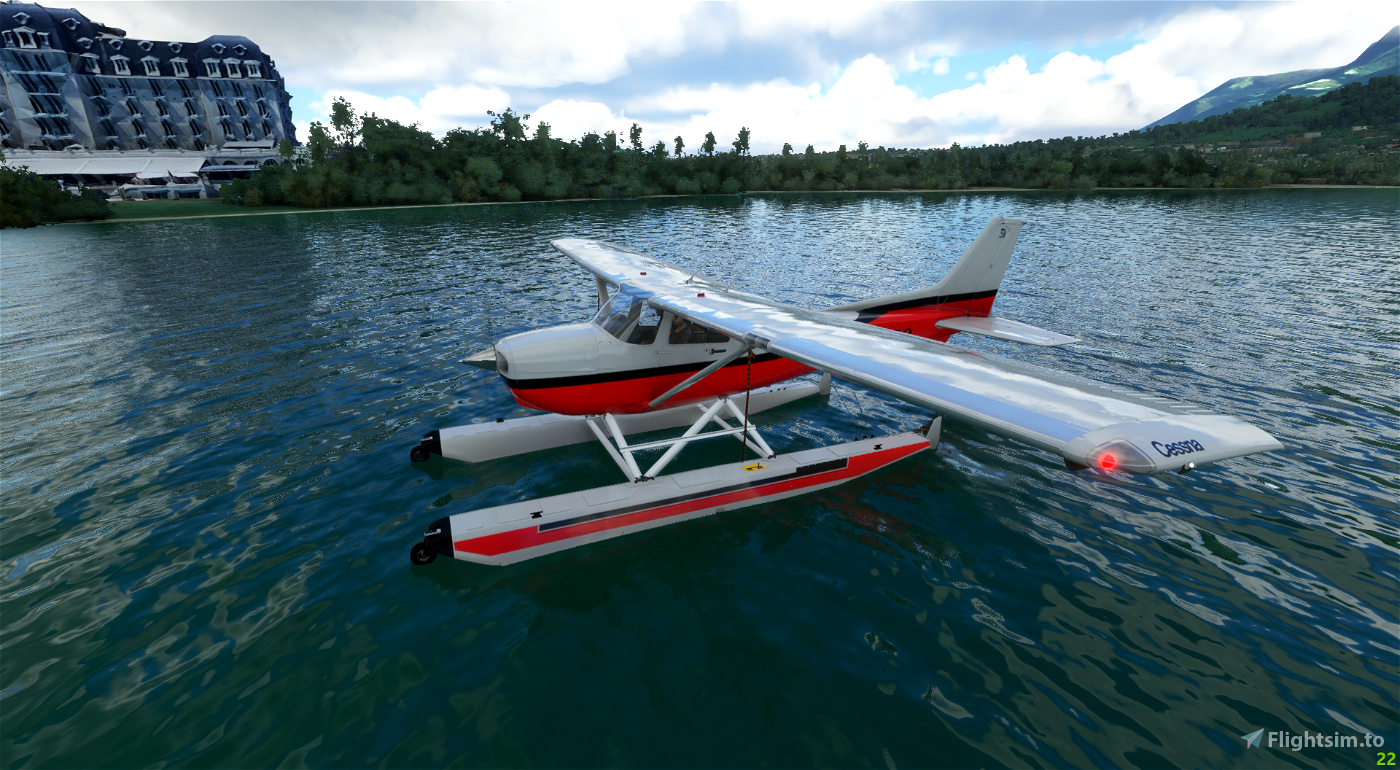 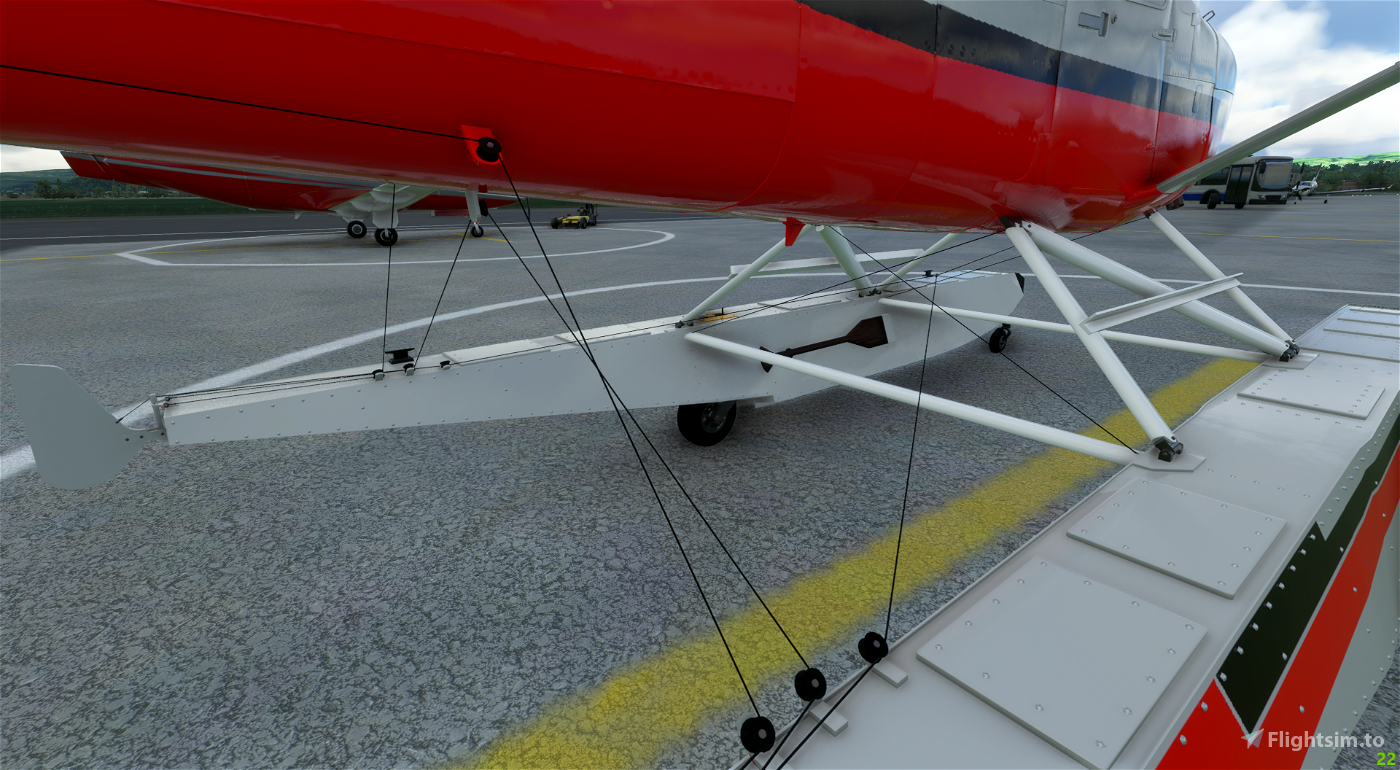 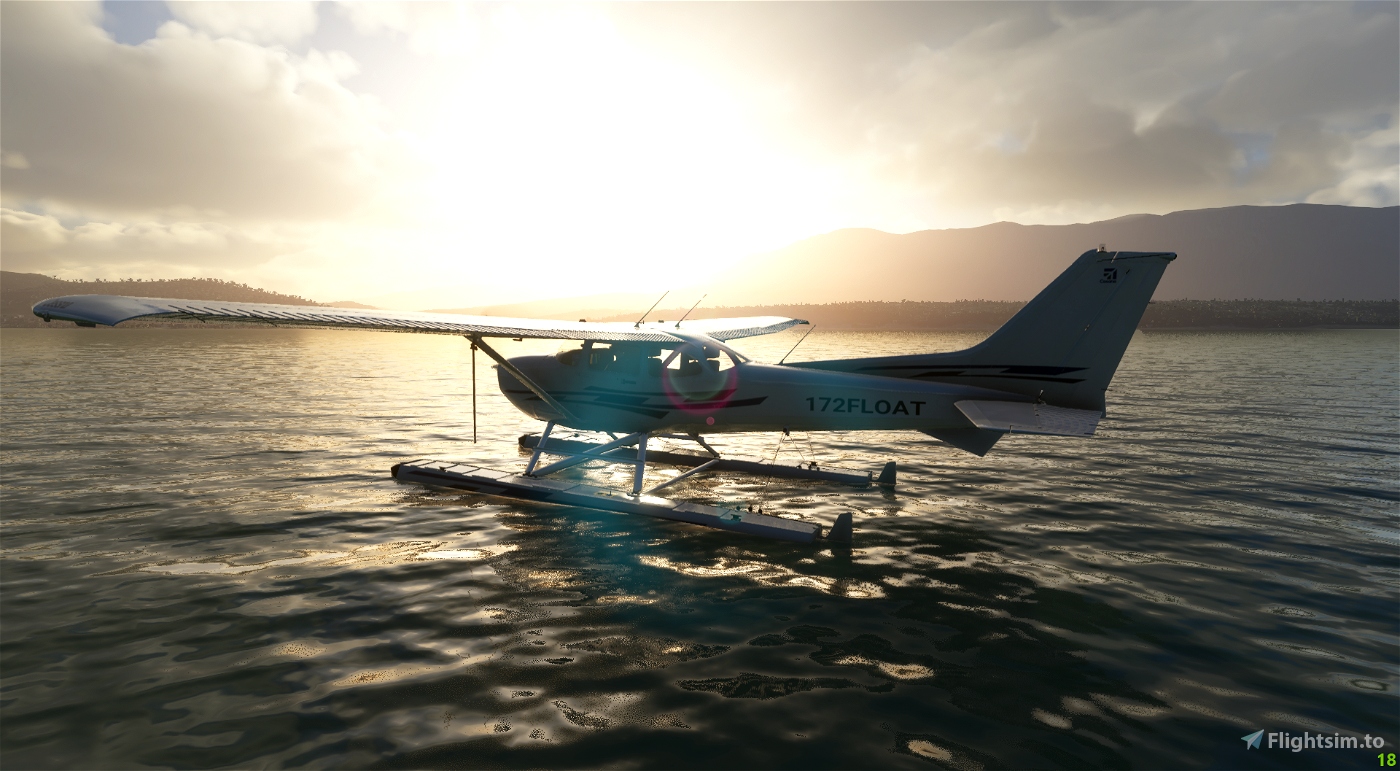 A powerfull member of the short take-off and landing capable Skyhawk family built on a Lycoming 210HP STC :

This is a plane patch over Asobo's Skyhawk and adds a new plane to your hangar (located at the begining : letter C... like Cessna)
This mod respects the Game Content Usage Rules from Microsoft.

Be gentle when landing on sea (as much as on ground), try not to bounce or you may crash.
Check the gear indicator on the float through the window : gear have to be retracted for sea landing.
Cockpit has not been modified, so you will find no gear lever, and no water rudder lever : use shortcuts/buttons (ctrl+w is the default for water rudders)
That's sad, but water rudders are currently useless in the game : they have no effect at all on water.

Water rudders have to be retracted (there is no visible indicator in cockpit currently)
Steering on ground should be operated with differential breaking (breaking left or right). I have not disabled rudder control, so you can still use it.

Several liveries are included with this plane :
Default livery, blue & gray, thanks to ANN0V
Wendy thanks to 270INC
Red livery and green livery inspired from real seaplane C172 liveries

Flight model is based on reaperS73 work on the C172 STC 210HP STOL G1000 and allows to operate in a STOL mode in bush locations.

Well obviously, anywhere !
You will find a lot of very nice customized places with seaports, pontoons, marinas on flightsim.to
If you have no idea where to start, look at the nice seaports in Alaska made by Photosbykev and sjfly2.

3D model has been made with blender from the export of Skyhawk G1000 Asobo's original model.
All the external textures and animations had to be redone and match the original definitions.
Floats have been modeled from real Wipline (c) models
A huge thanks to Newktv's developpement series that helped a LOT.
Many thanks to EzRyder who figured it out how to use the classic cockpit MikeFear303 for the classic cockpit xml & systems trick !
Special thanks to 270INC with the Wendy livery. 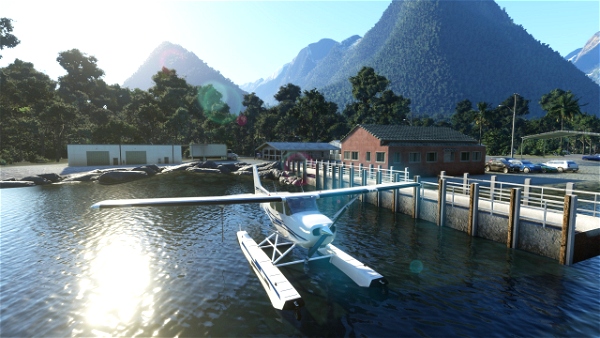 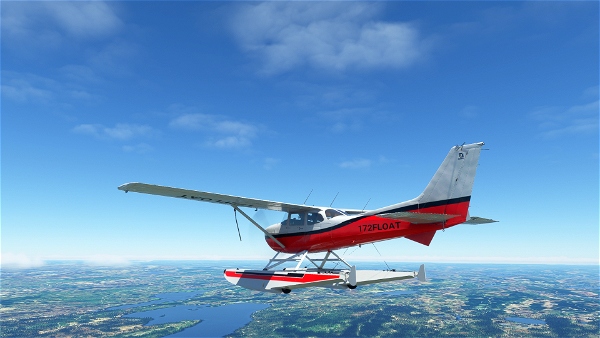 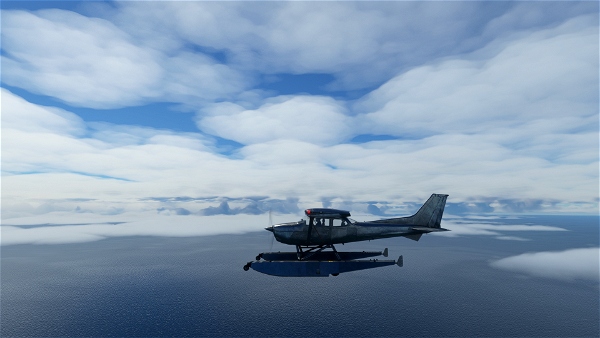 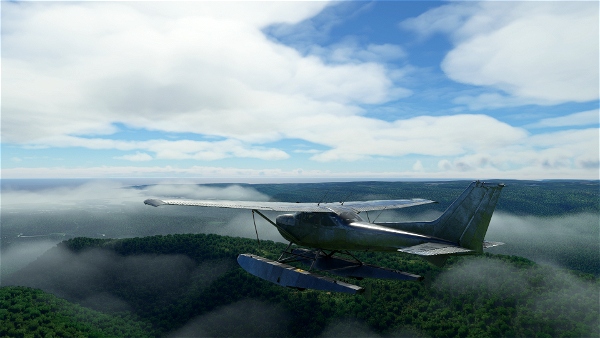 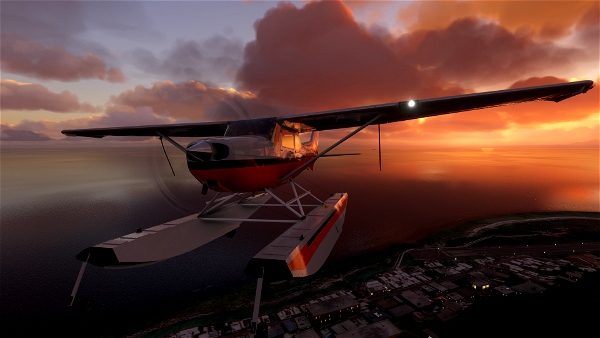 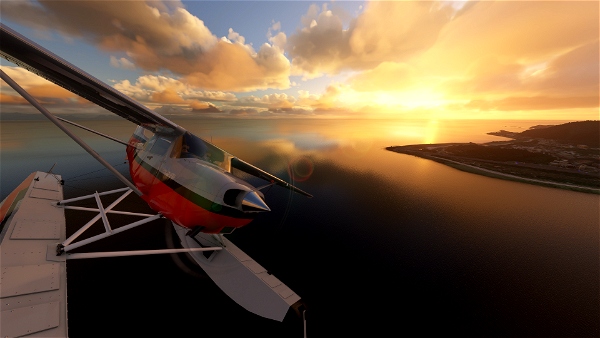 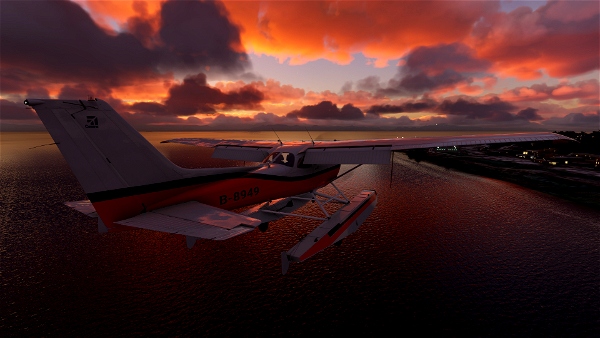 Wow, excellent job! I think you nailed it! I never fly the Cessna 172, but with your floats, I can't stop flying it now, lol. Thank you!

Excellent work on the physics of interacting with the water. Don’t know what you did, but so much more realistic than the Ikon. Requires proper technique on rougher water. Kudos!

Loving it any chance you might do the caravan next?

I know parorng is working on it ! 😉

Good to have something different. FS2020 limitations accepted, a little over powered, cruising at just 1/4 throttle and the trim seems a little over sensitive but that could just be me 😊 Anyway, nice work, thank you. here's a little video https://www.youtube.com/watch?v=FZGJ0hIdcYg

It is still over powered and will be corrected as soon as I can !

Having no problems with your amphib-classic - "love it".

FYI Your amphib-g1000 causes a CTD every time. The CTD's go away after I remove the g1000 file from my community folder. I looked and did not see in the comments section here that anyone else is having this problem, it fact my friend in GA is not having any CTD problems with your g1000.

Thanks, John in NC

Maybe because of another C172 mod ?

This is brilliant, Thank you

having a blast with this one!! 😀 great work as always bagolu, thanks and keep it up! 😊

It's not just this plane, but anything I've tried to use from this site... they don't work because I run into the same issue every time; Path too long. I have been in RegEdit and changed to LongPathEnabled on. I've done this for global settings and it does not make a difference. I have a whole 2TB NVME gen4 drive specifically for MSFS, so it is not default pathing and I think this is my issue, but I can't seem to find a way around it. My community folder can't possibly be further down the pathing hole than someone running it on their C drive. Below is the pathing I use. Any help would be appreciated.

"upper"? What does that mean?

I have had so much fun flying this aircraft around, I have alaways wanted a version of the C172 with floats 😀

I do however have a few (minor) things I would like to see improved:

- I would certainly like, in the aircraft selection menu, to see the company name renamed to "Textron Aviation" to match the default Cessnas, as Textron is after all what is behind Cessna.

- The ropes dangling off the wings are very well animated, but they seem to be still very much pointing mostly towards the ground when going ~120kts. A bit off-putting lol

- The cockpit pannel of the "Blue and Grey" livery on the C172 classic, has a black pannel, a bit wierd in my opinion. Another livery without a black panel would be greatly welcome

- Finally, while I find it amazing that you did In fact make the aircraft icon not just from a screenshot but with the white backround on the aircraft selection screen, the aircraft seems to be a little too... close-up?

Regardless of these details, outstanding work! And, of course, I'm very much looking forward to future updates

Thanks for your inputs !

I'll let the model name as Cessna : all Cessna mods are using that name (L19, bush, taildragger, 152 backcountry, and probably all the future ones) . Only Asobo used Textron for their own models, which is quite disturbing when you have a lot of mods and have to search T for Cessna.

The ropes have a simple animation : angle depending on speed, there's no real physic behavior in there 😊

Concerning the liveries and colors, there are some cool liveries coming in on fs.to. If you find an interesting one, you could easily replace the interior files with the original ones. But I get your point and I will work on that for a special "livery release" in the future : I know two of my external liveries are not very good and we have a brand new interior reworking project going on and also an external special effects feature too !

In the meantime, if you really want to replace the interior, you can overwrite the plane files with the original ones

Can you be more specific ?

(I know Carbon's work on Xcub and love it)

Well, maybe it is just me who not used to fly float plane but I find th XCub doesn't bounch as much as your Cessna when doing water landing. The XCub and some float planes I saw online also leans backward slightly when floating still in water. I hope this is helpful.

Beautiful¡ Now I can land on remote lakes and explore their surroundings. Thank you¡👍🏻😀

Wonderful to have an amphibian!

Really enjoying this. Thanks for making this! The plane feels nice and heavy with the floats. I do feel exterior textures as seen from the cockpit could be improved, like on the wing struts and floats.

I agree, I made myself two of the liveries a bit quickly. They need rework

Can the contact points be adjusted so that the back of the floats sit a little lower in the water?

It's already done here and will be part of the next release.

Here are your stars, sir!

Fantastic update bagolu, and so fast! You set the bar impossibly high for other developers 😊 Really look forward to your further development of this wonderful gift to the community.

I know it's sad but I won't be modifying the cockpit : I have no easy way to do it right now and it would only be on the G1000 : the classic is locked under drm.

Look through the window at the gear indicator status 😉