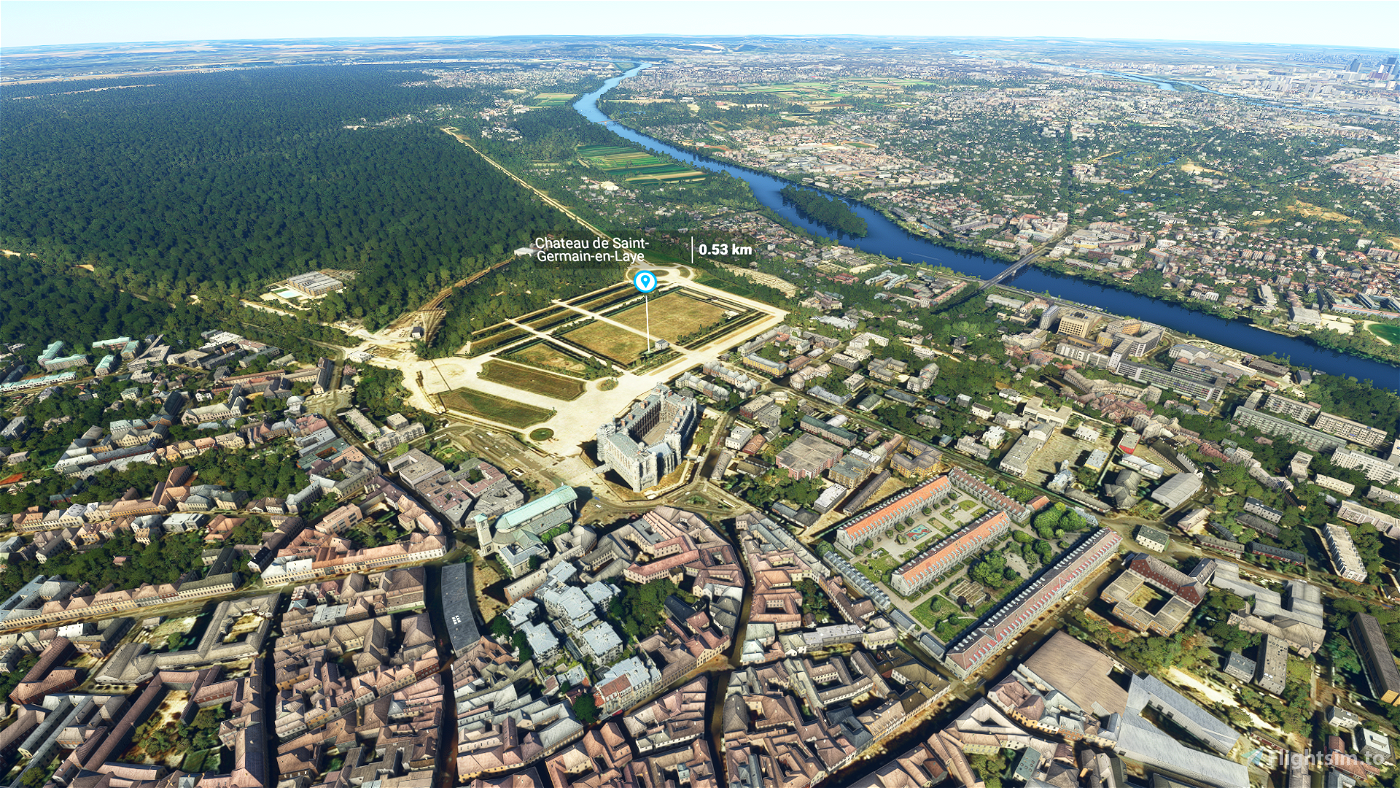 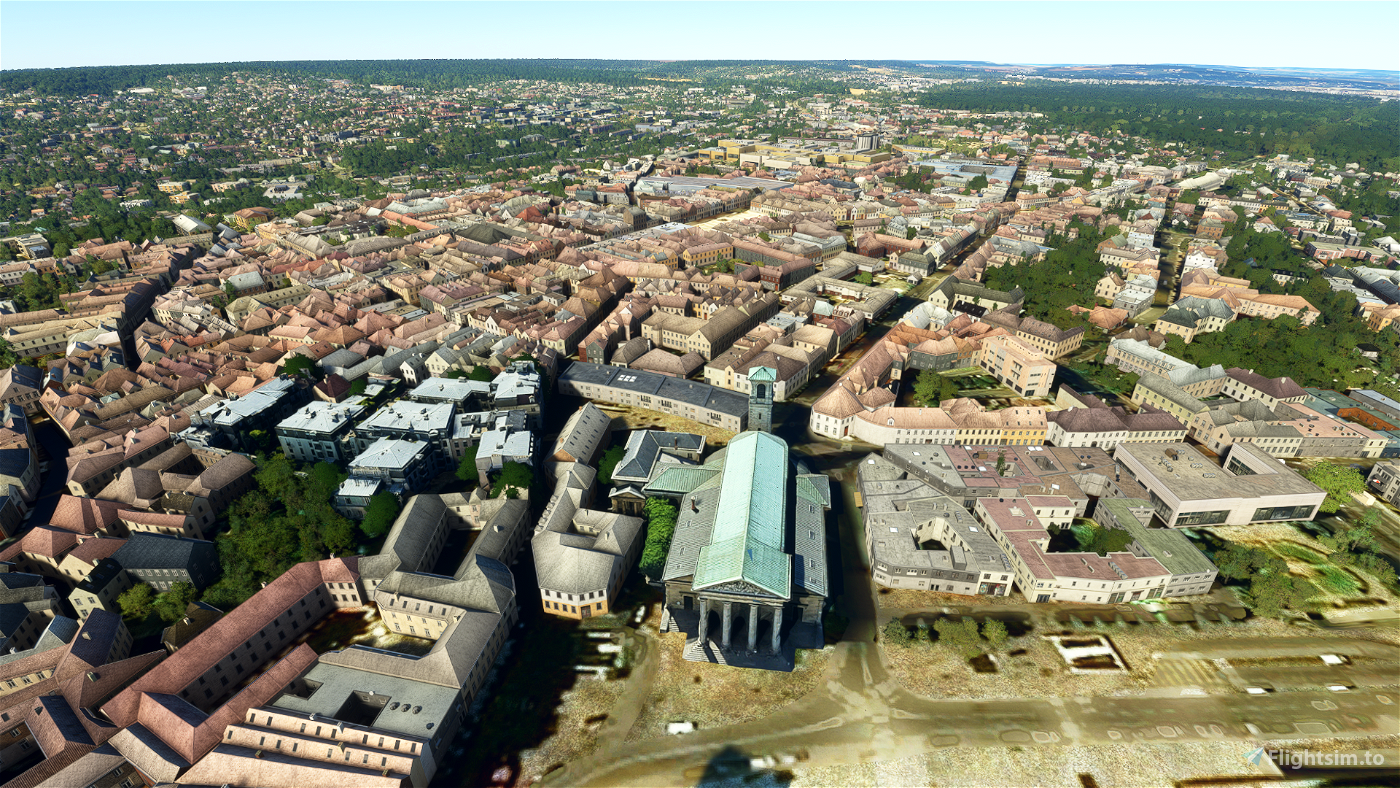 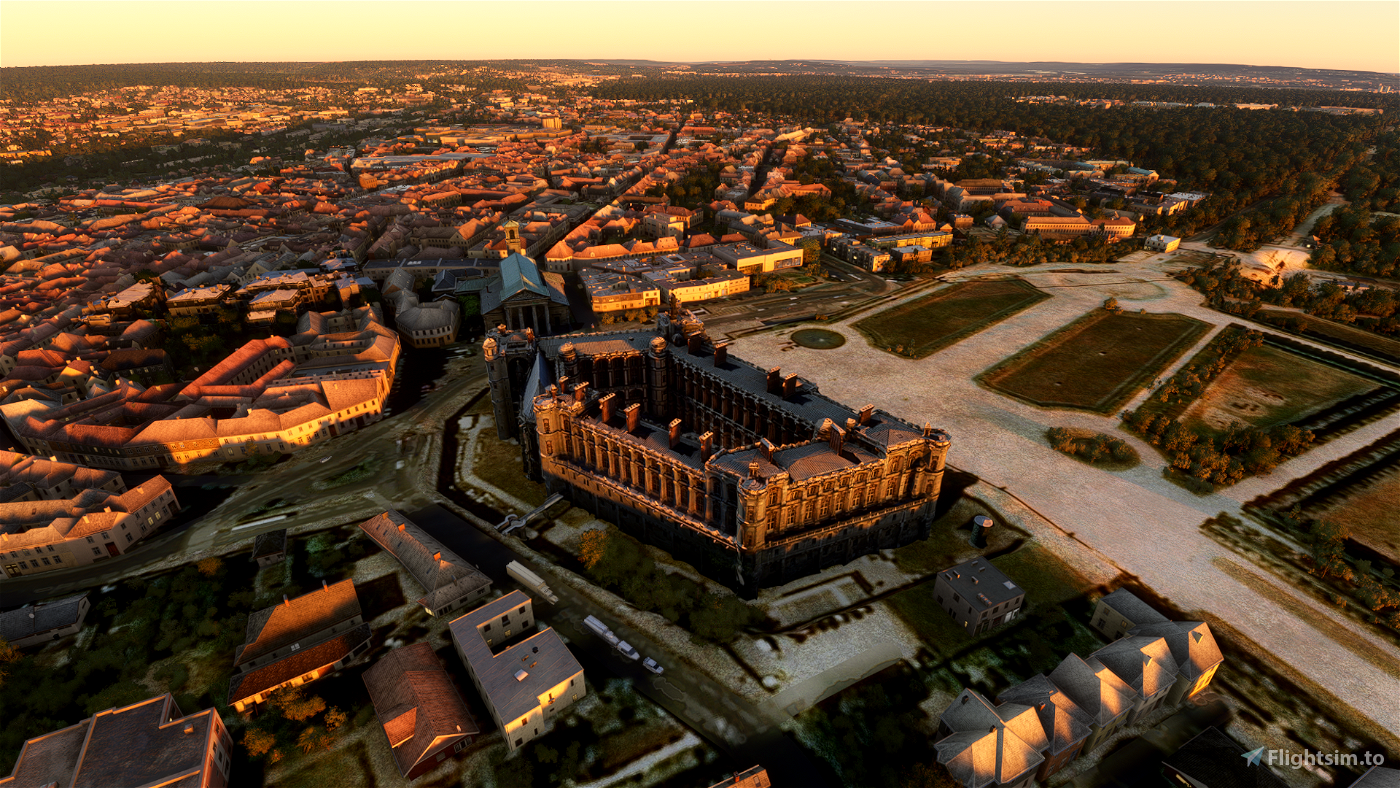 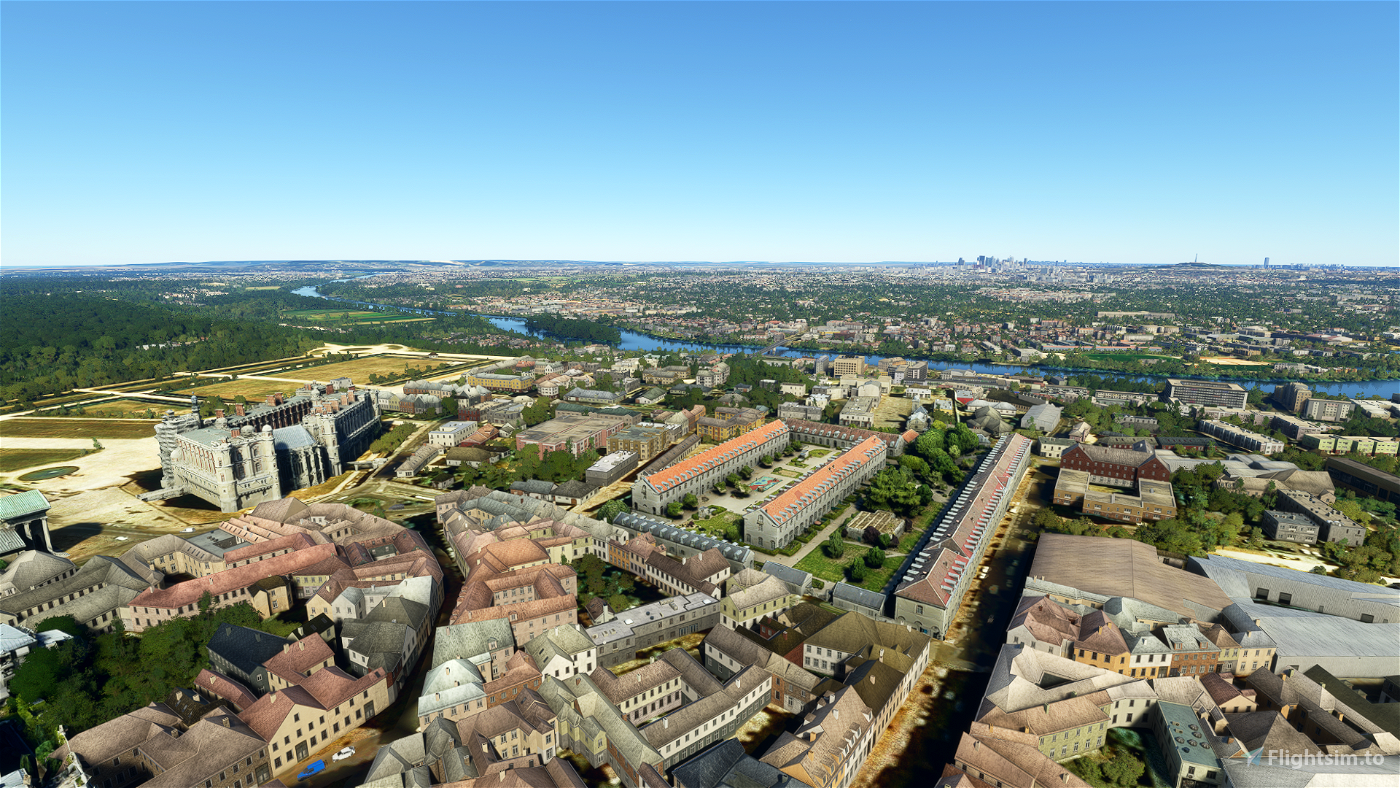 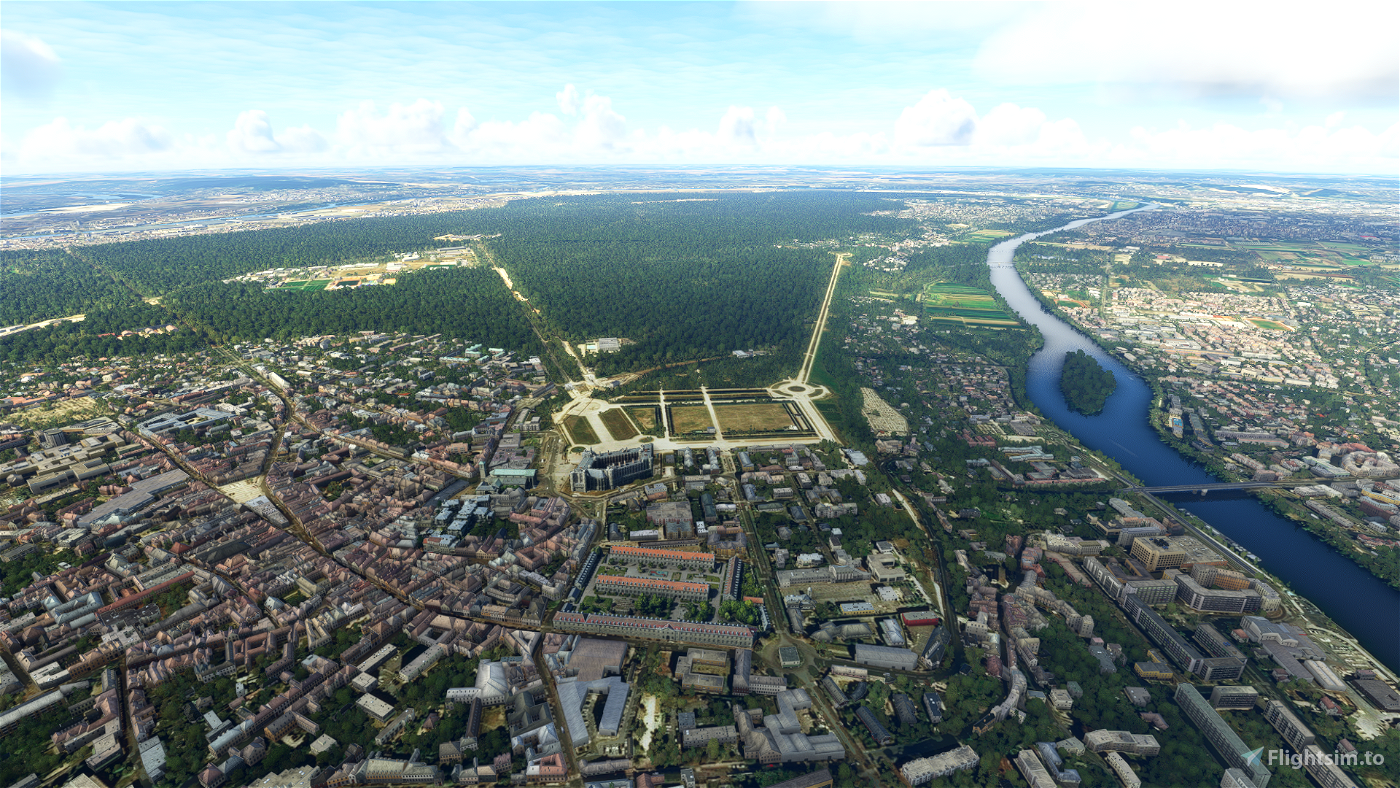 The first castle, named the Grand Châtelet, was built on the site by Louis VI in 1124. The castle was expanded by Louis IX in the 1230s.

The castle was burned by the Black Prince in 1346; of it, only the Gothic chapel remains from the site's medieval phase. This Château Vieux was rebuilt by Charles V in the 1360s on the old foundations.

The oldest parts of the current château were reconstructed by Francois I in 1539, and have subsequently been expanded several times.

The gardens were remade by André Le Nôtre from 1669 to 1673, and include a 2.4 kilometre long stone terrace which provides a view over the valley of the Seine and, in the distance, Paris.

Louis XIV turned the château over to King James II of England after his exile from Britain in the Glorious Revolution of 1688. King James lived in the château for thirteen years, and his daughter Louise-Marie Stuart was born in exile here in 1692. King James lies buried in the nearby Church of Saint-Germain; his wife Mary of Modena remained at the château until her death in 1718.

In the 19th century, Napoleon I established his cavalry officers' training school here. Napoleon III initiated restoration of the castle by Eugène Millet, starting in 1862. It became the Musée des Antiquités Nationales (National Museum of Antiquities) in 1867, displaying the archeological objects of France.

On September 10, 1919 the Treaty of Saint-Germain-en-Laye, ending hostilities between the Allies of World War I and Austria, was signed at the château.

During the German occupation (1940–44), the château served as the headquarters of the German Army in France.

The museum was renamed the Musée d'Archéologie Nationale in 2005. Its collections include finds from Paleolithic to Merovingian times.

This pack also contains aditional mods for the city of Saint-Germain-en-Laye:
-Eglise paroissiale de Saint-Germain-en-Laye:  Located opposite the castle , this church, built in 1824 , in a neoclassical style inspired by early Christian basilicas , was restored by Joseph Nicolle from 1848 to 1854 . Its facade has a triangular pediment supported by six Tuscan columns, four of which are aligned on the facade and two in return. It was classified as a historic monument by decision dated July 23 , 1937
-Casernes de Saint-Germain-en-Laye: Located in the city center, in the immediate vicinity of the castle, the Gramont barracks ave been reconverted into housings.
-Galerie Saint-Germain: this commerical center is rendered in the vanilla game as a single flat building; this mod makes it more faithful to reality.

This pack does NOT contain a full photogrammetry extract of the city in order to keep acceptable size and performances for lower configurations.

Parts of this content includes 3D data and textures copyrighted by « Google Map data ». Google Maps and Map data are provided by © Google, LLC, Mountain View, California, US. This free creation contains content from Google Maps or Google Earth, in accordance with Google Terms of Services and especially point 2.2 of Google Maps/Google Earth Additional Terms of Service. This creation is based on « fair use » or « fair dealing » of the data provided by Google through its services. No commercial use or any gain will be made by the author of this creation or the original host site, who use Google assets as provided for by the simple user licence. The author is freely sharing a creative application of Google Maps or Google Earth. The author will not receive any form of remuneration for sharing this work. Spontaneous general donations from users of file hosting web services under the form of « rewards » or « tips » will be rejected. If this content is found elsewhere and is offered in exchange of money or any other kind of remuneration, it is without the permission of the author and if such theft of intellectual property occurs, this site, and the author will disavow such distribution. Google has stated that it cannot answer to any direct demand about a particular creative use of its properties, as it stated in the « written permission » paragraph of the same document, and all such demands should in the first instance be directed to the author of this work. The author’s verification of compliance with Google’s Terms of Services will rest on this statement of intent, and the use of the provision of the « Fair use » paragraph of the document. As it is economically unreasonable for the casual creator of this content to ask for a costly legal analysis of its creation like proposed in the « Fair use » paragraph of the document, the author of this creation and the owners of this site undertake to destroy any trace of the work on first demand from Google, in accordance with the paragraph « Taking action in case of problems » of the Google Terms of Service about « advance notice » provided « when reasonably possible ».