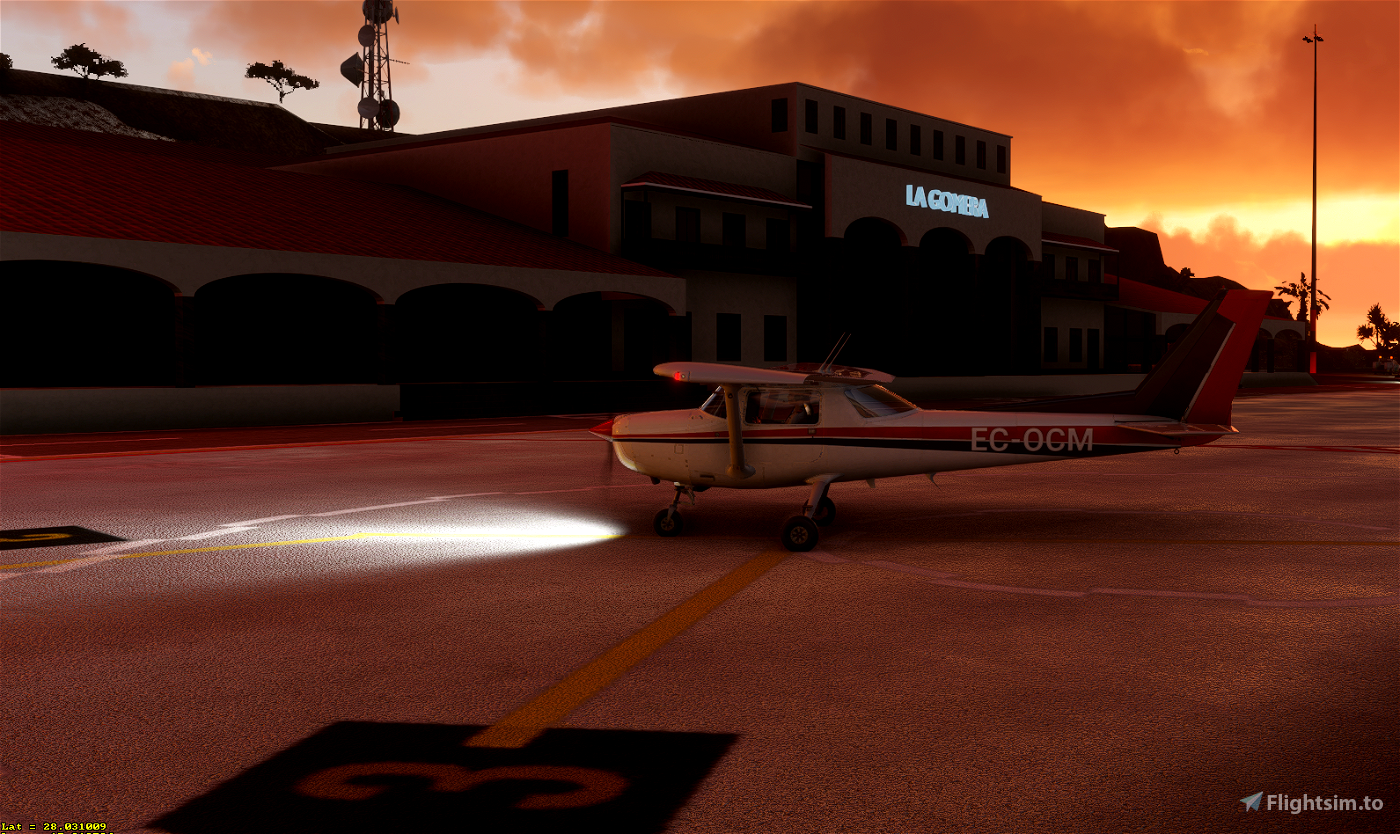 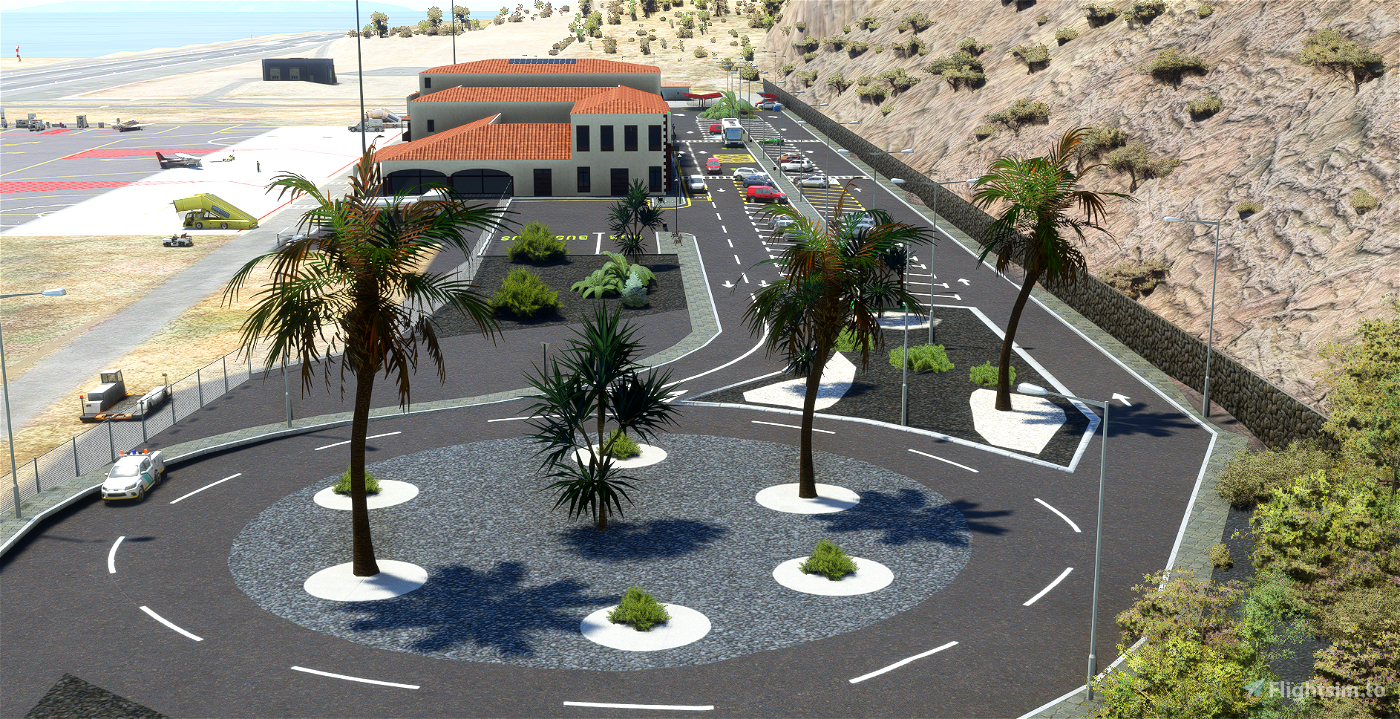 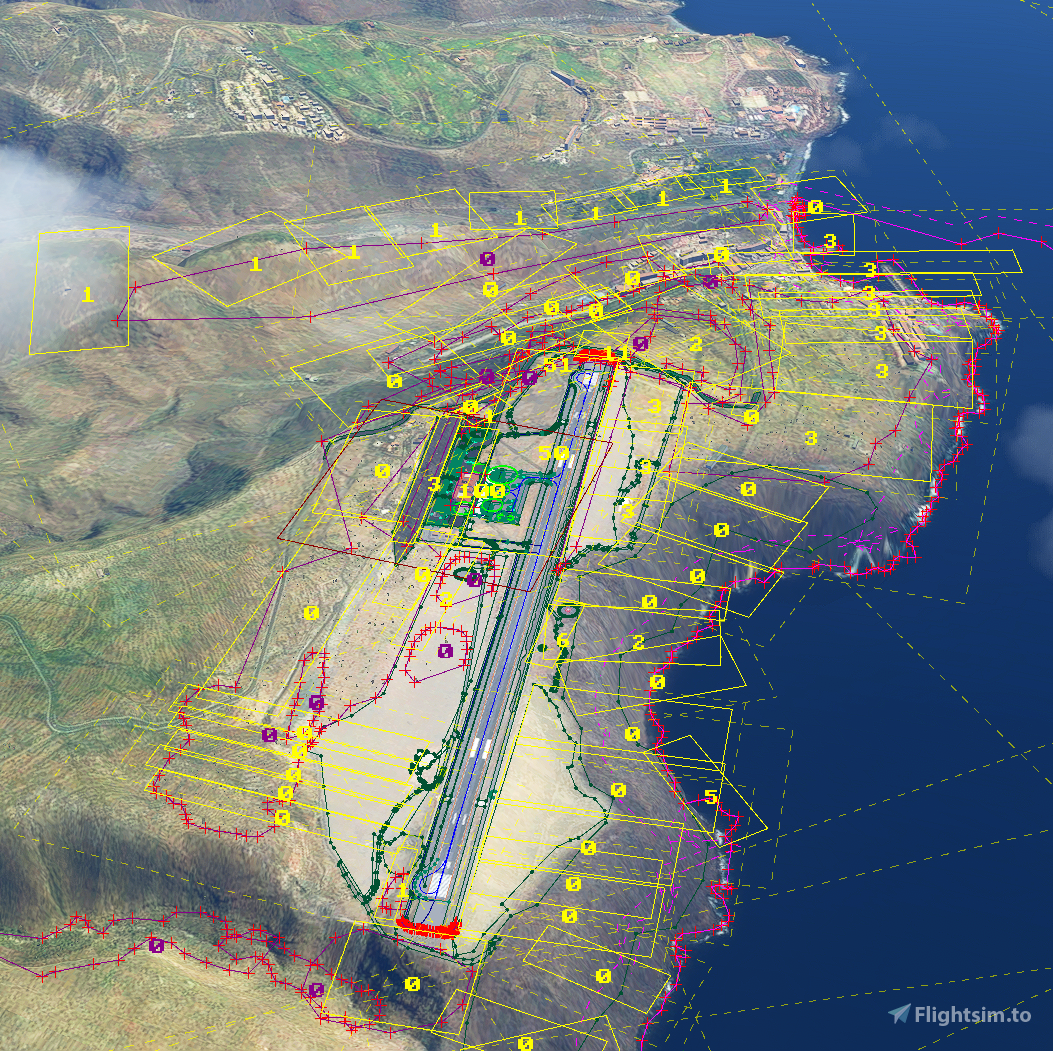 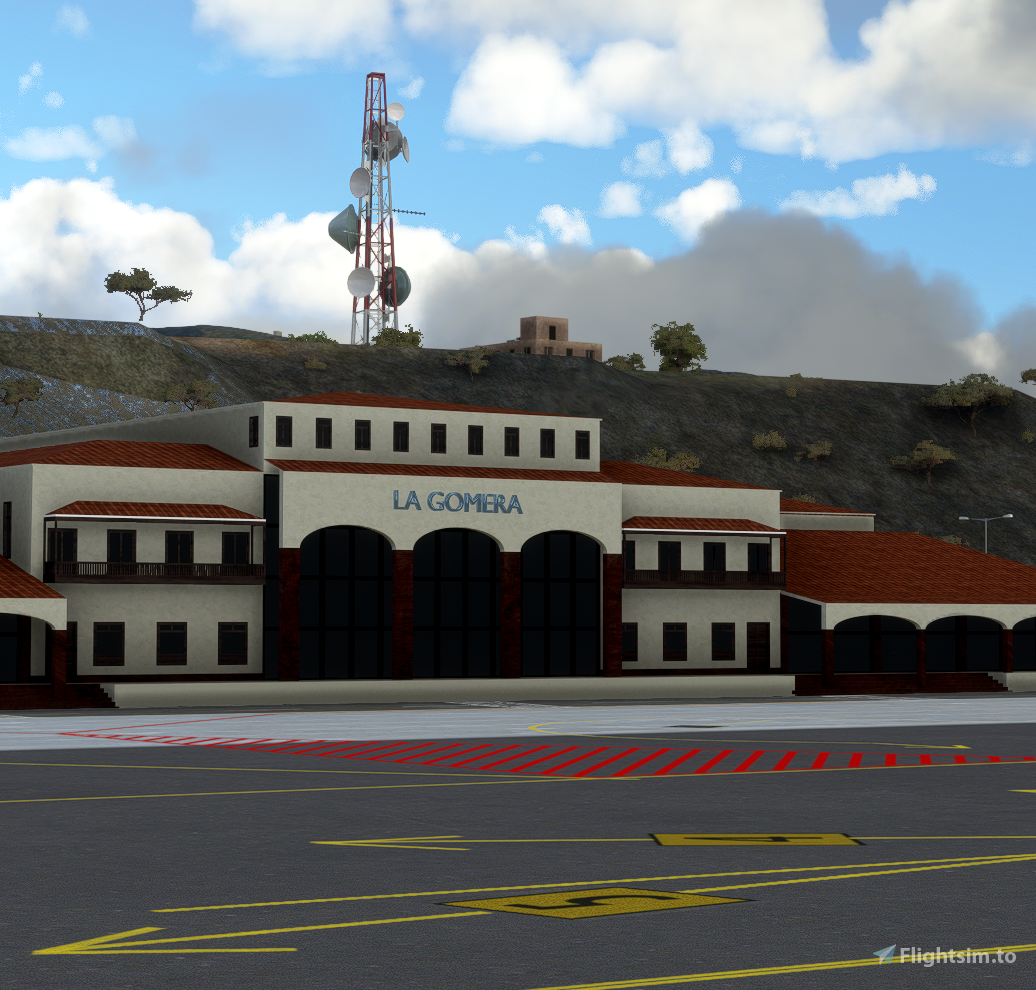 The airport has been done as accurate as possible based on pictures and videos found on the internet, bing maps, google earth and sigpac for the accurate mark and position of all the taxiways, lights, parking spots, car parking spots, traffic signals, etc. However, I could not complete the tower of control nor the fire station. If anyone could provide pictures of those two buildings I will finalize the airport.
Althhough MSFS provided the airport the terrain surrounding it is a complete disaster. Just take a look by yourselves, and check the ocean climbing 200 meters of height almost getting to the runway. Then compare with the job that has been done. As you could imagine the toughest part has been aconditionating the terrain, as currently MSFS SDK does not provide good enough tools and I have not been able to find how to inject elevation data in the simulator. If anyone knows how to do it, please contact me. Once this said, I know that the mesh needs to be improved, but I did my best with my knowledge and the information found so far.

The airport was located here to avoid disturbing the Garajonay National Park and avoid the cloudier and foggier climate to the North of the island (very similar to all the Canary Islands due to the alisios winds and the topography and nature of the volcanic islands) , whilst the volcanic terrain gives few suitable sites anywhere on La Gomera, although even this site required extensive embankments at both ends of the runway.

Aviation in the island of La Gomera started in the 1950s, when a private airfield was constructed. Its name was "El Revolcadero" and it was situated in Tecina. This airfield had a runway (09-27), an hangar and a small stand which was used as control tower. The airfield was for the owner's private use and for emergencies and fumigation works. If you´d fancy finding it...it´s there.... if you are brave enough... try landing on it.

In 1962, the island had a lot of sanitary assistance problems, so studies to build an airport in the island were started, but this project was not carried out until 1975. However, due to the opening of the Tenerife South Airport and a new maritime line with the island, the project was again delayed.

Finally, in the 1980s, problems with wounded snake-bite evacuations necessitated building an airport in the island, and on 27 July 1987, an agreement for the construction of the airport was signed.[6]

At the end of 1994 the airfield had a runway (09-27), an aircraft parking and a taxi way to the runway. The elected place to build the installations was the "Meseta de los Acantilados" (Plateau Cliffs), which is located 2 kilometers from the old airfield of "El Revolcadero".

At the end of 1991, when Aeropuertos Españoles y Navegación Aérea (AENA), literally "Spanish Airports and Air Navigation", took over the airport, a passenger terminal was built, which was inaugurated in 1992. This passenger terminal has two floors and we can see in it the typical canarian architecture.

It is completely forbidden to use or redistribute any of the material provided in the airport without my written authorization.

It makes one happy to check that the job been done is being downloaded, but it makes me happier indeed if at least you leave a comment if you enjoyed it or report any bug or feature found. There have been many hours of effort put on creating this as the other airports so any kind of tip is highly appreciated.

2 month(s) ago
I have not yet downloaded your airport, but from the pics you've made, it looks absolutely incredible. So detailed, so nice. From the pics you already get the canarian "feeling". As a moderator myself, I know how many hours you put into works like this. I will look forward to download, land and experience this airportscenery.

2 month(s) ago
Your scenery looks absolutly stunning. I'm from germany and love the canary islands. Because I often fly to Lanzarote in vacation, I would be amazed if you create a scenery for that island too. Thank you very much. Greetings ;D

2 month(s) ago
Nice one. Really kicking myself in the butt now that I bought the one from SimWings 😊

2 month(s) ago
Nice!
No helipad arround?

Thanks,
As published in AENA charts they match position 1 and 3. You´ve got the marks on both.
https://aip.enaire.es/AIP/contenido_AIP/AD/AD2/GCGM/LE_AD_2_GCGM_ADC_1_en.pdf

2 month(s) ago
Beautiful scenery - thanks for sharing it with us !

2 month(s) ago
What a great job! Absolutely top scenery.

2 month(s) ago
Superbe Job. Thx for the work.

I really appreciate your comment. I wish you enjoy it!!!

2 month(s) ago
Congratulations, excellent work !
Thanks a lot

2 month(s) ago
Many thanks to La Gomera!

https://www.youtube.com/watch?v=U8sHWgZSlRw&ab_channel=JayDee
I hope that helps

Hi Jeremy,
If you change to IFR it will be offered as the standard airport.
Unfortunately the SDK does not include enough tools for noobs like me to implement SID/STARS or ATC apart from the one that comes out of the box in the sim.
I´ve just checked the standard edition without the airport added, and the ATC offered is exactly the same that you will receive with the addon.
However, I add the ATC to my investigation list 😉
You can find the real charts here. That information has been used for illumination and marking, placing windsocks, and accurate position of parking spots.
https://aip.enaire.es/AIP/#GCGM

2 month(s) ago
What a beautiful airport. It is not hard to see that you have put many hours into this and have a great eye for detail. I enjoyed reading your notes and the history which adds to the experience. It is work like this that makes our hobby so thrilling. My only disappointment is that 148 people have already downloaded your hard work and only one of them has shown any appreciation. You need to be encouraged to keep learning and keep going. You have my thanks. Enjoy a coffee.

Oh man!!!!! Thanks a lot!!!
It is people like you that makes this community also fantastic. J
Just your comment make my Sunday morning great 😊