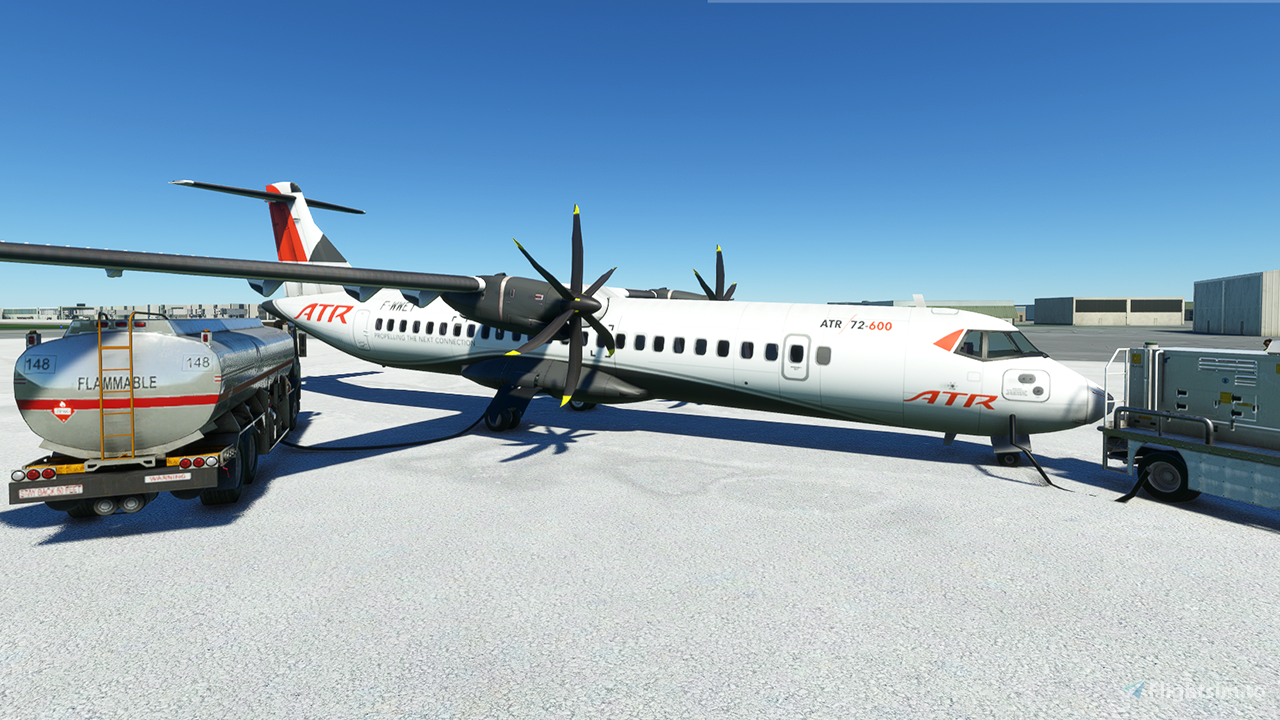 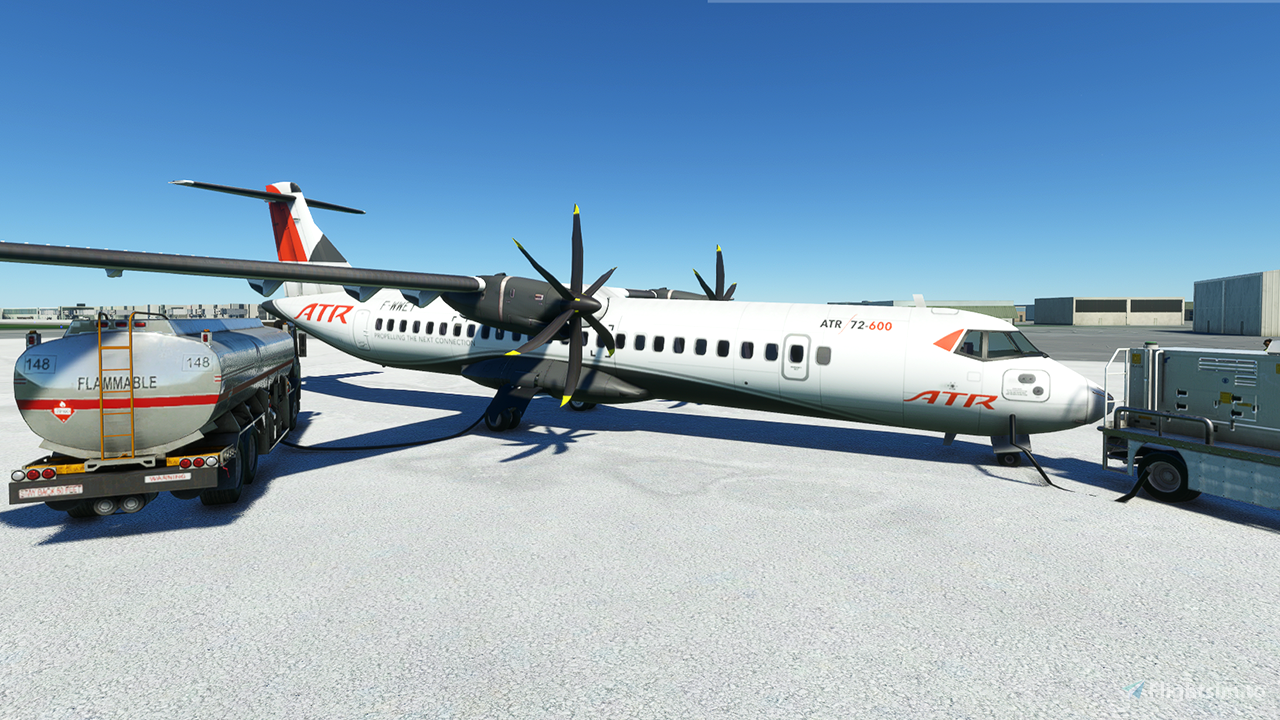 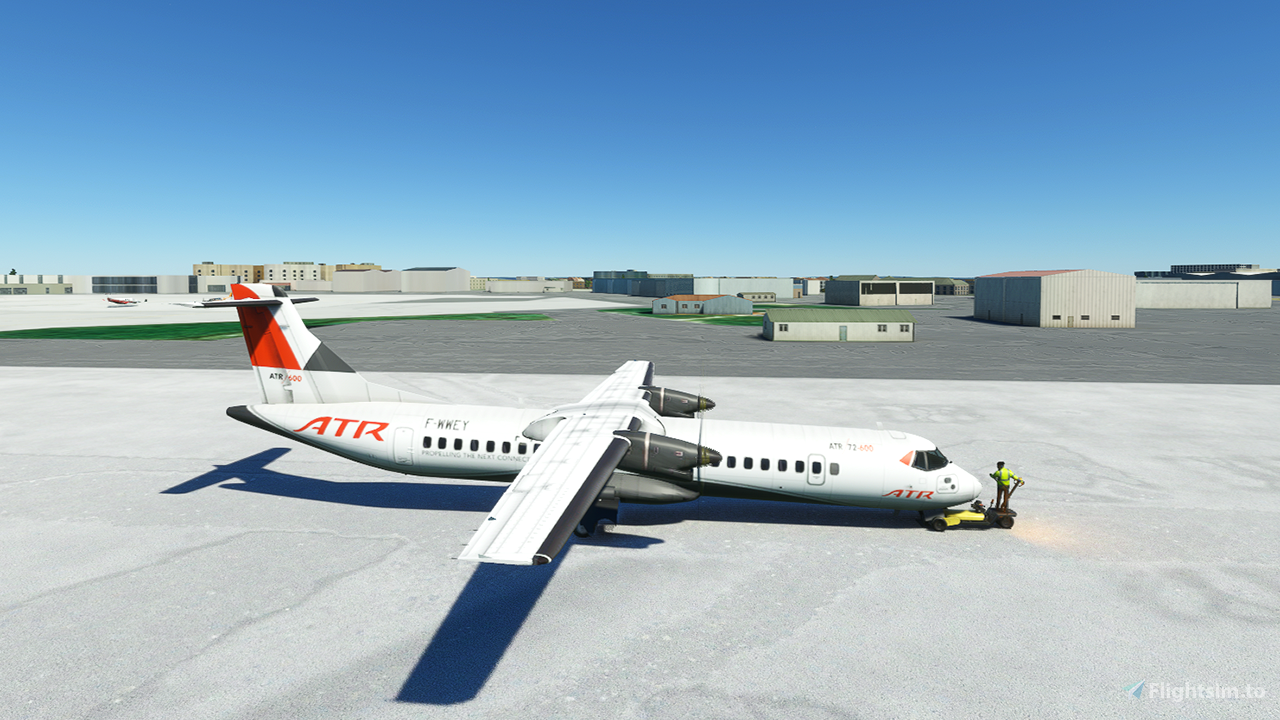 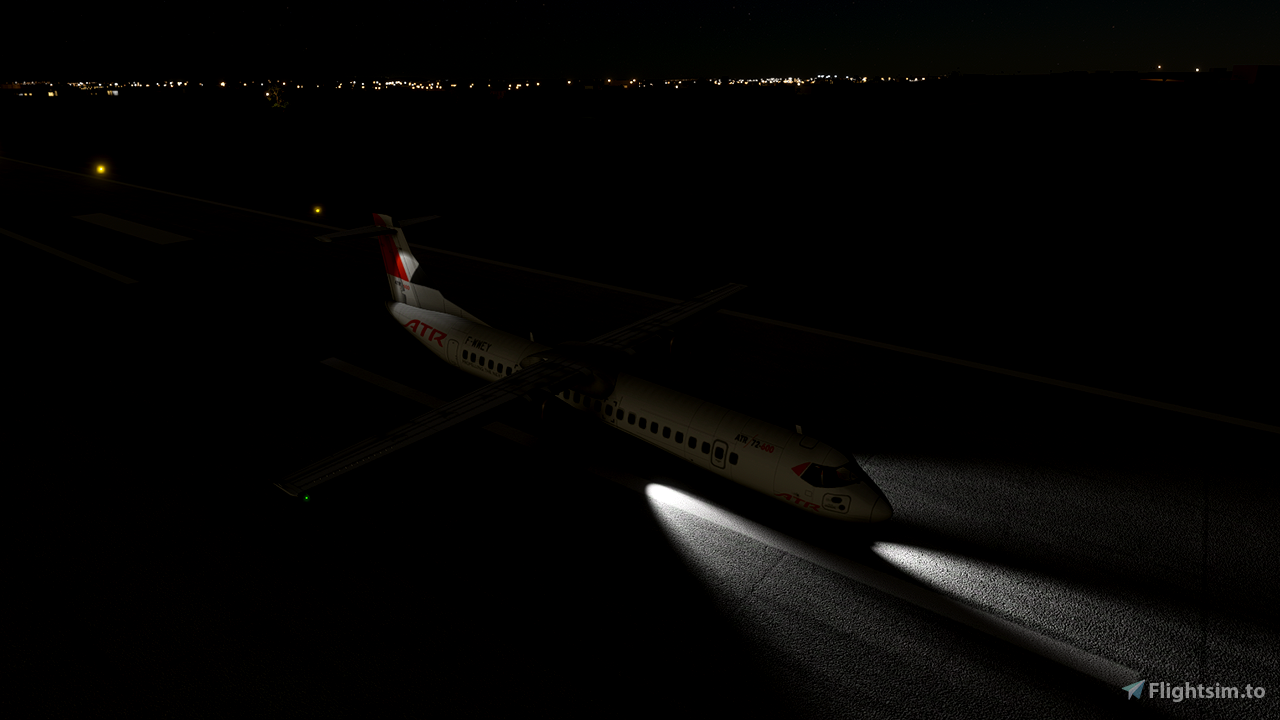 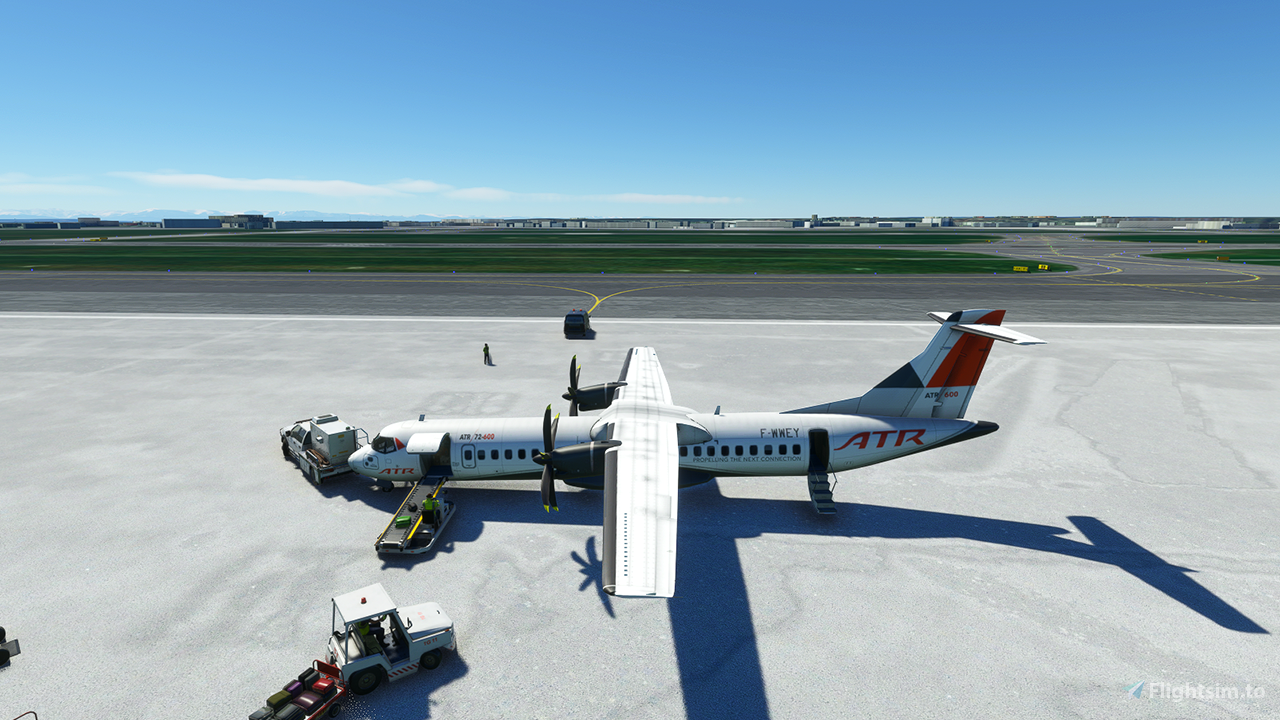 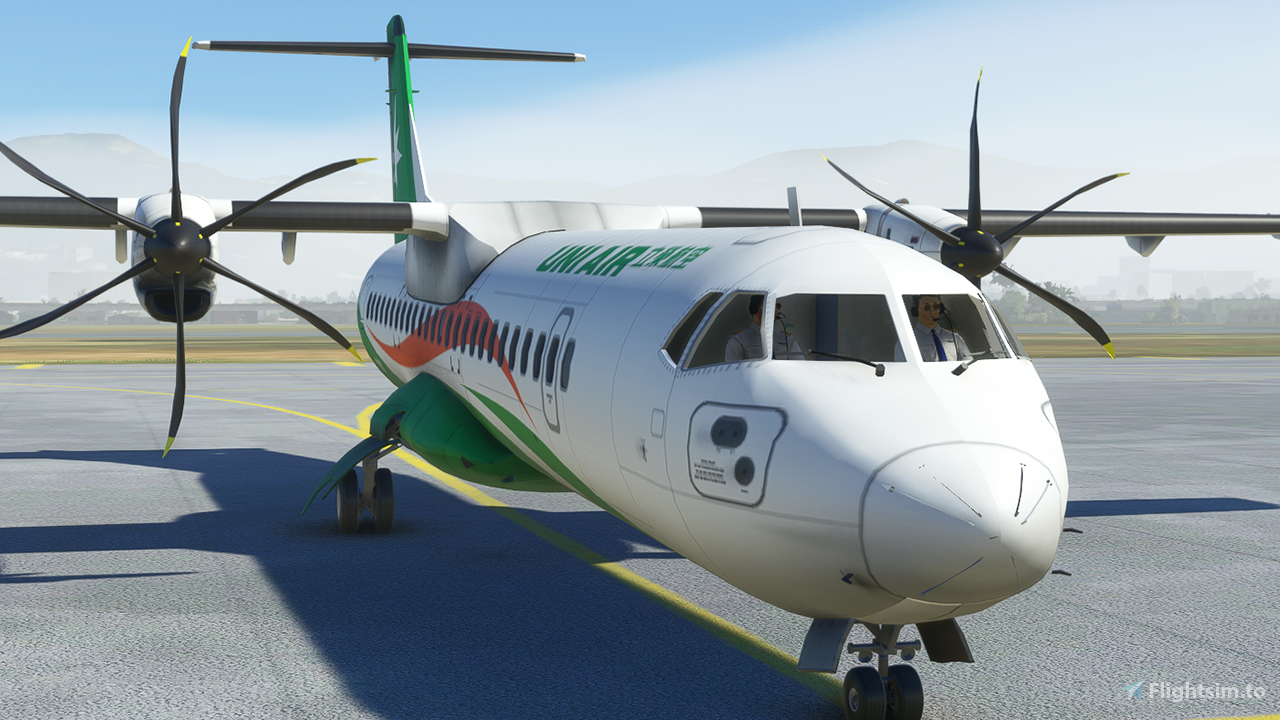 * Please DELETE the old version everytime before installing a new version, and read the FAQs before raising a complaint or question *

This is a total remake of ATR72 for FSX by Virtualcol, which was released as payware initially. Animations and flight dynamics have been reproduced from scratch, ground interactions have been added, and all the lights have been made working. It can be cosidered a native FS2020 aircraft rather than just a converted model, and no more "_CVT_" folder would be generated.

The adaptation of the mod is done under formal permission from Virtualcol FS Software®:
https://www.virtualcol.com

FS2020 converted version initially done by Capt22
Youtube (Channel:MultiGamer 0822) / Discord
The old version by him can still be downloaded here in case you need. There are several breaking changes for liveries, but you can convert them using the converter provided in the download page. (NO GUARANTEE for successful conversion). You can still use the paintkit from virtualcol for creating new textures, but the file extensions have been changed from ".dds" to ".png.dds"

Thanks to marajin for helping to improve the flight dynamics.

As MS already announced that there will be a new payware ATR series released next year, I was thinking about the future of this mod. I've decided to put the codes (without 3D models and textures for copyright restrictions) for this mod to be managed by GitHub, which allow all of you to submit your improvements, but you are advised to have test flights in challenging airports like Paro and Toncontin to prove the performance of your modifications. Here are the repositories of the mod and the converter:
https://github.com/kychungdotcom/ATR72-600
https://github.com/kychungdotcom/atr726-livery-converter

* I don't have a VR device to fix any problems related to views on VR, any help is appreciated *

How to manually convert the liveries?

In case the converter failed to convert your liveries, do the following steps:

How to fix if I failed to see the texture of the cockpit?

How to use the converter to convert the liveries?

The converter could be found in the download page of this mod.

Upon running the converter, you may see there is only one button in the convert, which ask you to choose the TOP LEVEL FOLDER containing the liveries.

Why using the KingAir cockpit instead of CJ4?

It is chosen as the cockpit for the new version over CJ4 because it works better with turboprop aircraft. However, in this moment I should admit that we don't have enough resource and know-how for making a custom cockpit. It is far more complicated than those for FSX or before.

Using the cockpit of KingAir instead of CJ4 is a difficult decision, but CJ4 is just a different kind of aircraft from ATR, and the cockpit of CJ4 have no control on what a turboprop have, such as mixture and propeller pitch control. In terms of visual similarity and complexity, an Airbus cockpit would be more similar to ATR, which ATR is a joint venture that Airbus participates. For a fully functional multi-engine turboprop, KingAir is the only choice for all versions of FS2020.

For those who have hardware throttle panel installed, you should put the engine switch to "OFF" BEFORE a cold and dark start to prevent the starter from being unable to switch off, otherwise the battery will be drained off in several minutes. This is a bug of the Kingair panel.

What are the main differences between a converted FSX aircraft and a native FS2020 aircraft?

A converted one still use the legacy .MDL format for 3D models and .AIR format for aerodynamics. These formats have been replaced by GLTF for 3D models and those parameters in the .AIR file have been migrated into different CFGs. However FS2020 somehow keeps the backward compatibility for these legacy formats, this is how a converted aircraft works.

How to open the rear exit door?

In FS2020, the doors of aircraft need a connection with ground vehicles or jetway to let it open, in the case of ATR the rear exit would be opened at the same time with baggage door upon requesting baggage services from ground frequencies, if there is one.

The exterior of the aircraft is hidden in cockpit view for purpose. The position and the window shapes are different between a KingAir cockpit and ATR. If the exterior is turn on, you will find yourself sitting inside the passenger cabin. It is a limitation of this mod.

12 day(s) ago
I like it but am wondering if anyone else is having CTD issues (usually at landing) when flying this aircraft?

Sometimes I experience CTD issues when the center hand me over to the multicom frequency for non-towered airports under IFR, not limited to a certain type of aircraft, but it seems that the problem doesn't exist anymore after 1.15.x

13 day(s) ago
Any chance you will update the thumbnail photo using a screencap from the hangar (in Developer Mode)? I'm one of THOSE weird people that like thumbnails consistent with the stock planes. Yes, I can do it myself- but of course, it gets overwritten each time there is an update. It's a minor thing, not a big deal- but please consider it if there's another release. Thank you.

13 day(s) ago
Didn't think I was going to enjoy this this much. Great mod dude

13 day(s) ago
hi! love this mod, please can you create an Eastern Airways livery for it? (G-IACZ) is a very simple livery so i imagine it wont be too difficult for you

You may submit any livery request here:
https://flightsim.to/requests/new

Can you please create my requested livery

14 day(s) ago
Looks very good inside out. The monitors look a bit pale and no switch to correct it.

15 day(s) ago
Just want to let you know that I truly appreciate the work your are doing on one of my favorite aircraft. Thank you very much.

There will be no 1.0, I will also switch to the payware announced by M$ when it is released, and then this will not be updated anymore. However it is also known that the payware one will not be released in this year, so this one would still be maintained for a time.

There will be no ATR in WU5. The ATR will release somewhen in 2022.
Developing a complete aircraft and its systems takes time, lots of time.

16 day(s) ago
Does it have a ATR Cockpit or a CJ cockpit?

Negative. It uses the KingAir cockpit

16 day(s) ago
could you make it compatible with the other atr 72 liveries.

Breaking changes are inevitable, as the previous version 0.1 by Capt22 is just a converted model, but this one is a native FS2020 aircraft. You can use the converter to convert your liveries to be compatible with this one, have a look at the FAQ section

18 day(s) ago
I downloaded your last version, it does not work, we can see that the texture in the photo, in the hangar and in game, the plane is invisible, I used your version before last and it works, I thank you for your work, I am very pleased. Good continuation . PS Thank you so much for wonderful job .

It is a known issue for "borrowing" the cockpit from another aircraft. There are workarounds for this, but it will create new problems. The only "solution" is not to move your eye point outside the aircraft when you are in cockpit view, and wait for the new payware ATR

18 day(s) ago
Are the Airline liveries which are available here working with this mod?

All the Liveries done by me are working with this mod. For using the liveries from other creators, you may have to use the converter, which could be downloaded at the download page of this mod

19 day(s) ago
Absolutely fabulous work! Greatest ATR ever on MSFS with this update. No words to express my gratitude. Thanks for the awesome work

20 day(s) ago
Can I make this Aircraft as ai traffic too
thanks .!!

I tried many times, but it seems that it failed to appear as AI traffic, still looking for what's going wrong

Thank you very much greatly appreciated.!!

I was just overflown by an AT-600 and the ATC gave a traffic warning with the correct model identification. Your aeroplane is the only one I have downloaded.

Thanks for your feedback

22 day(s) ago
is the fms work because the old one fms not work ?

There is simply no FMS for the King Air cockpit, so there will be no problem about FMS

I have added the cause of this into the FAQ section, it is a limitation of using a cockpit from another aircraft model.

You may have a look at the FAQ

Indeed. Would be nice if you can share some into. Thanks!

There is no major change for this version. I just updated some minor things to facilitate collaboration on GitHub

Issues i've experienced:
- Broken flaps in the air. They work on the ground, but when I try to land they are stuck.
- Aircraft is overly powered. Try full power and release the breaks. It will take off almost like a VTOL.

Other than that its wonderful!

It looks like manuevering_flaps are set to 1 in the flight_model.cfg (almost at the bottom of the file in the Flaps section. Just edit this to read maneuvering_flaps = 0 then the flaps will no longer auto retract and deploy depending on speed/wing load like an F-18's 😊

Your branch has been merged, thank you for your contribution